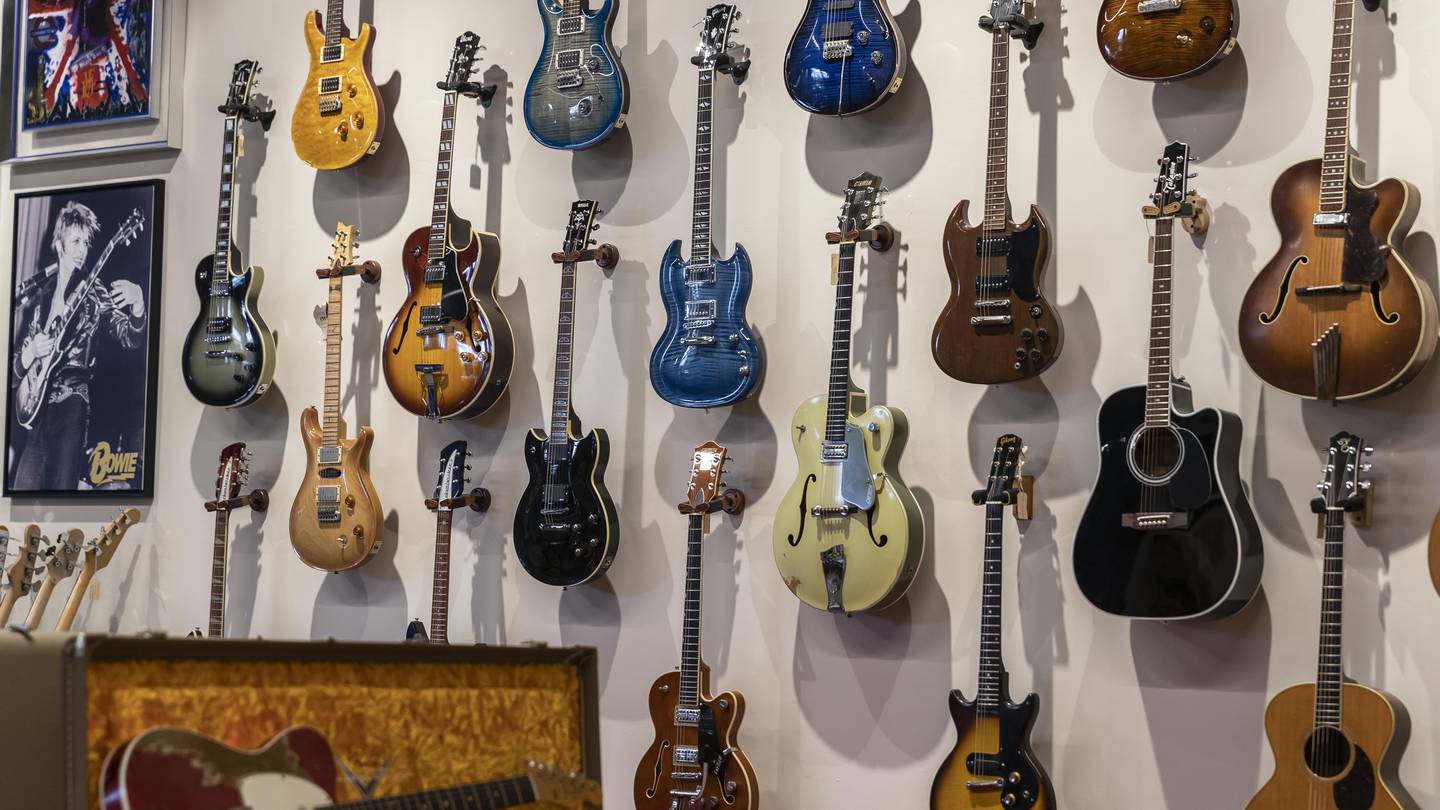 a museum, art gallery and guitar store at Al Quoz in Dubai

Until ten years ago, the cluster of shops clustered around the Deira Fish Roundabout was one of the only places you could buy a guitar in Dubai.

You couldn’t be picky either. The collections were limited to a handful of entry-level models, most of which were poorly stocked and set up. The guitars had rusty strings, poor intonation, and in some unfortunate cases nicks and scratches.

Patient and skilled luthiers were needed to bring guitars into playable form, and they were hard to come by.

Fortunately times have changed. Reputable dealers of brands such as Fender, Gibson, Ibanez, PRS and Martin have popped up across town.

You can walk away from most Dubai malls with a hypnotic chime Stratocaster or a Les Paul set to last for days. Even the stores around Fish Roundabout have refined their inventory and are stocking their instruments more conscientiously.

But there is a glaring absence in the market for vintage and high-end guitars – guitars off the assembly line, but handcrafted by master builders, who have been honing their craft for decades.

It is the void in the regional market that Art of Guitar aims to fill. Located in the courtyard of Al Quoz, the shop has taken over the space left by an art gallery. Its founder, Rick Vlemmiks, says space continues to fulfill this function, in a way, by presenting instruments as works of art.

“I’ve collected guitars all my life and I’m an avid guitarist,” he says. “Arriving in Dubai seven years ago, I noticed that it was possible to get high end instruments, but the selection was very limited and they were not stored and presented as they should be. . “

One of the problems is the high temperatures in the UAE. Humidity indicators are installed around the Vlemmiks store – most notably on the guitar stands in the center, as well as on the walls adorned with colorful solid, hollow-body, acoustic and arch-top guitars.

“The humidity is regulated in the same way as in the workshop of the Martin custom shop,” explains Vlemmiks, referring to the famous American guitar maker. “Because with the acoustic guitar, the best [wood] is what creates the sound and if you store a guitar in bad wet conditions – very dry conditions, which you tend to have in a shopping mall – you would be amazed at how quickly this destroys the sound of a guitar .

Among the most upscale offers in the store is a Greenfield G2.2, priced at 69,000 Dh. The acoustic guitar is made of alpine spruce and East Indian rosewood. It features vented frets for more precise intonation as well as a nice beveled accent to the side.

“The guitar is made by a luthier called Michael Greenfield,” says Vlemmiks. “He makes 10 guitars a year. There is a five-year waiting list, and you have to pay $ 10,000 just to get on the waiting list. It has a moon spruce top, which is harvested during a full moon because it gives it that resonance.

Another Art of Guitar centerpiece is a Les Paul Custom which is a handmade recreation of the 1979 ax used by Adam Jones, guitarist for the American rock band Tool.

Featuring a warm antique silver luster, the guitar is crafted from a remarkably dense piece of mahogany and offers no weight relief. The characteristics are what make Jones’ unique deep bass tones and tight midrange. The guitar is also fitted with a maple top which gives its highs enough kick to cut through the mix. It costs 50,000 Dh.

An arsenal of Fender Custom Shop guitars fill the store’s right-hand alcove, from Eric Clapton’s “Black” Stratocaster built by master builder Todd Krause to a heavily reconstructed Telecaster that recreates the famous 1962 model with the rosewood fingerboard. Then there are some real vintage parts, like a 1968 Jaguar with a shiny candy red finish, on sale for 30,000 Dh.

You’d be hard-pressed to find some of these guitars anywhere else in the world, let alone the Middle East, and most of Art of Guitar’s offerings come with a Certificate of Authenticity, so you know it’s the real one. case.

“With the vintage stuff, we take pictures of the neck, body, parts, wiring, and we’ll have experts certify it for us,” says Vlemmiks. “So this guitar, for example, will come with a certificate that it is an authentic 1968 Jaguar Fender.”

Souvenirs from some of rock music’s most historic moments can also be purchased at the store, including old posters of The Doors and The Grateful Dead as well as original photographs of The Beatles during recording sessions. Signed portraits of Def Leppard, Albert Lee, George Harrison, Liam Gallagher and Eric Clapton are also up for grabs.

Vlemmiks says Art of Guitar tries to be more than just a guitar store, but rather a meeting point for musicians in the city.

The place also offers guitar lessons in several genres in its practice space, as well as guitar building workshops led by in-house luthier Basil Azizoghly. He is renowned for his uniquely shaped, handmade Howlin ‘Rooster guitars, which decorate the shop’s workshop. Some of his most eye-catching designs are the guitars made from reclaimed Syrian mosaic jewelry boxes, tin cans, and cigar boxes.

During the cooler months, Art of Guitar also intends to become a performance venue for local artists, installing an ad hoc outdoor stage in the courtyard.

“Part of the reason we chose this place is because of the atmosphere,” says Vlemmiks. “It’s a bit like New Orleans from Dubai. When it cools down again, around September, we’ll have live sessions here. It’s a way to support local talent.

Matthew Rolston at the Laguna Art Museum – Art and Cake

Currier Museum: An artistic installation reflects the anniversary of September 11