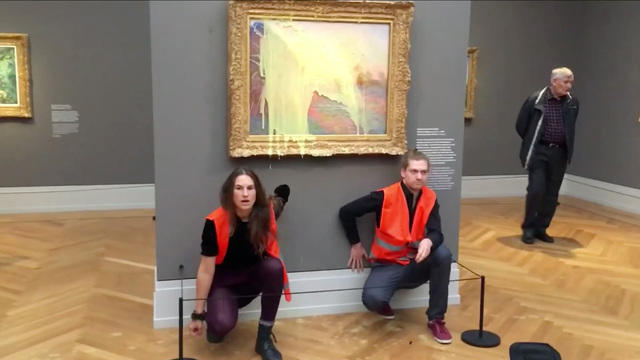 Johannes Vermeer’s iconic painting ‘The Girl with a Pearl Earring’ was targeted by climate activists at a Dutch museum on Thursday in the latest public display of vandalism to famous works of art.

Pictures posted on social media showed a man pouring a can of what appeared to be some type of liquid while trying to stick himself to the iconic artwork in the Mauritshuis museum in The Hague. He was joined by another man who was wearing a “Just Stop Oil” t-shirt and shouted a message to customers.

As visitors expressed their annoyance to the protester, he told them the art was protected by glass and that was “very good”.

“Vulnerable people in the South, they need to be protected,” he said. “The future of our children is not protected.”

Police said in a tweet that they had arrested three people for “public violence against property”. In a statement to Associated pressthe museum said Vermeer’s famous painting was undamaged.

“The condition of the painting was investigated by our restorers. Fortunately, the glazed masterpiece was not damaged,” the museum said.

CBS News contacted the Mauritshuis museum, but did not immediately respond.

This incident comes after a recent series of eco-inspired protests across Europe. Earlier this month, environmental protesters tossed tomato soup on the painting ‘Sunflowers’ by Vincent van Gogh at the National Gallery in central London. On Sunday, two climate activists launched mashed potatoes at Claude Monet “Les Meules” at the Barberini Museum in Germany, then stuck under the painting.

The DePaulia | Made in Chicago: the museum showcases the city’s products