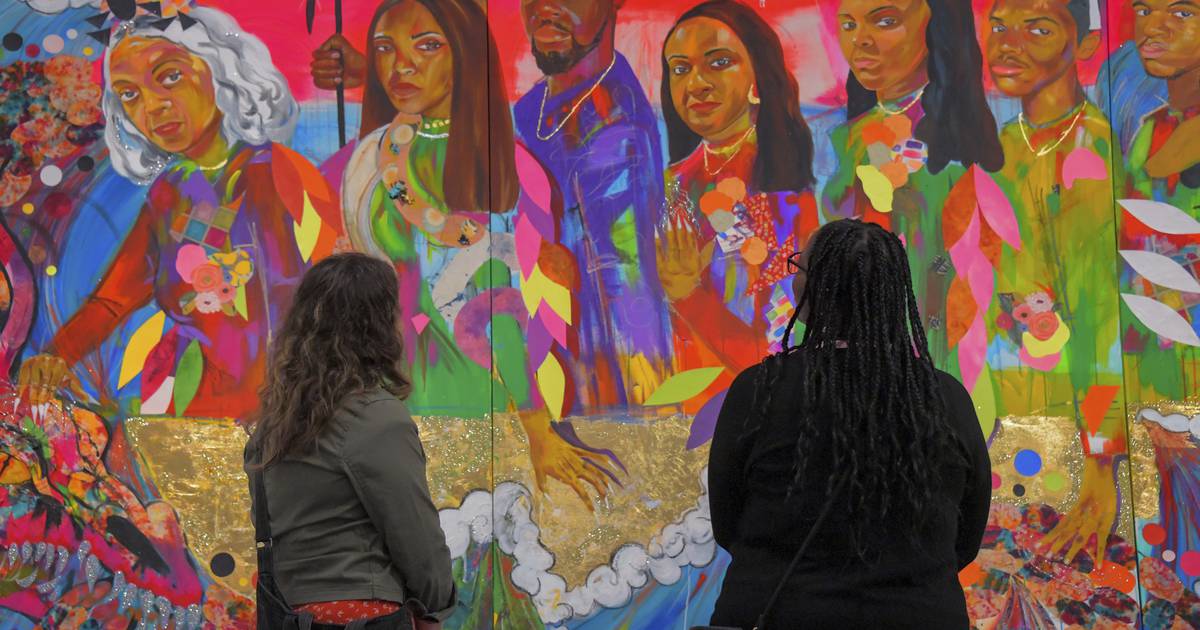 Some journeys begin on foot, with a frightened look over the shoulder and a rush into the night. But Larry W. Cook Jr.’s great migration began with the click of his camera lens.

In 2019, in a devastating single year, the 36-year-old photographer and assistant professor at Howard University lost two people he loved dearly: the single mother who raised him, and his younger brother and best friend. So Cook Jr. took his camera and went in search of the only surviving person from his biological family – his father, Larry W. Cook Sr., who had been absent from his sons’ lives for most of of their childhood.

“My younger brother, Kevin, and I used to see him maybe once or twice a year,” said Cook Jr., who lives in Laurel. “I had a lot of anger inside, to the point where I built a wall to protect myself.”

As Cook Jr. prepared his work for “A Movement in Every Direction: Legacies of the Great Migration”, the new group exhibition at Baltimore Art Museum, the trauma inflicted on five generations of her male ancestors over nearly two centuries gradually revealed itself.

Through photographs and letters, Cook Jr. traces how social forces forcing some 6 million Americans from their homes in the South to resettle in cities in the North, a historical period known as the Great Migration, conspired – and failed – to tear apart a Black family.

“I made a promise to let go of the past,” Cook Jr. wrote in a letter to his father that is part of the exhibit. “And maybe together we can help each other heal.”

Cook Jr. is one of 12 artists who have received commissions to create photographs, paintings, films and sculptures that explore the impact of the diaspora, which occurred between 1915 and 1970. In some cases , whole families left their homes in the South and traveled together. . But often only one family member left, usually a man who had been threatened with racial violence, fleeing for his life and leaving behind his wife and children. These forced abandonments have caused divisions in families that have taken generations to heal.

The exhibition, organized by the BMA and the Mississippi Museum of Art, is causing a stir, in large part because it presents previously unseen works by three very big names: the painter Mark Bradford, the filmmaker Carrie Mae Weems and the artist installation Theater Gates.

After an exciting debut in April in Mississippi, the exhibit is expected to draw 30,000 visitors during the show’s three-month stay in Baltimore, said BMA chief curator Asma Naeem. After the exhibition closes in Charm City early next year, it is planned to visit three other museums in the country.

[ BOPA’s leader pledged to ‘dim the lights’ on Baltimore’s outdoor arts festivals. Now the city feels left in the dark. ]

Curators Jessica Bell Brown of the BMA and Ryan N. Dennis of the Mississippi Museum of Art mix these famous figures with nine lesser-known artists, many of whom have family ties to Maryland or Mississippi. This juxtaposition testifies to the confidence they place in these promising creators.

In particular, sharing gallery space with internationally acclaimed Bradford, who represented the United States at the 2017 Venice Biennale (often described as “the Olympics of the art world”), s apparent to be invited to jam with Paul McCartney at Radio City Music Hall. It doesn’t get much more heady than that.

Several of the commissioned artists have been personally affected by migration and have created works that feel deeply respondent.

Spectators looking inside the four black, glass and steel trapezoids that make up Brooklyn, New York-based artist Torkwase Dyson’s monumental “Way Over There Inside Me (A Festival of Inches)” find thin vertical columns of reflected light that seem to have been scattered to the four poles of the Earth, like displaced ghosts.

And in other galleries, the New York artist Leslie Hewitt creates a poignant symphony of empty spaces in her three installations entitled “Untitled (Imperceptible, Slow Drag, Barely Moving)”. Steel beams form the outlines of the rooms, and inside the mostly bare enclosure were placed heirlooms: fluted glass plates and tiny, delicate cups. The glassware is stacked on the ground, therefore transparent and fragile, barely protected. They could be shattered into pieces by one inattentive movement of a clumsy boot.

The exhibition also includes a recording booth where visitors can share personal stories of their own exoduses, voluntary or not.

For Cook Jr.’s commission, “Let My Testimony Sit Next to Yours,” he worked with a genealogist to trace his father’s family to South Carolina in the mid-19th century. The exhibit includes a tattered black-and-white wedding photograph, dated circa 1900, of the artist’s great-great-grandparents, James H. Cook Jr. and Minnie Pearson Cook.

A long vertical tear in the paper cuts the husband in half. Considering what happened next, this tear seems almost prophetic.

“My great-great-grandfather met a white man and had to flee South Carolina to Augusta, Georgia,” Cook Jr.

“He finally found work and a place to live and wrote to his wife, who was raising the family alone in South Carolina. He said he wanted Minnie and their children to move to Augusta. But the person who got that letter back wasn’t his wife. She was his daughter, and at the time, she was dating a young man. For fear of having to leave it behind, she hid this letter from her mother.

“The family never lived together again.”

Once the cycle of separation and loss began, the artist noted, it continued through the generations and eventually entangled his father.

“My dad had a tough upbringing,” Cook Jr. said.

The artist learned that his grandmother died when his father was a toddler and his grandfather struggled with alcoholism. Perhaps thinking that his son would be better off in a stable home, the grandfather sent his child to live with his sister.

By the time Cook Sr. celebrated his fifth birthday, his father was dead.

Cook Sr. declined to be interviewed for this story. But it is present in the form of a letter he wrote to his own father, William Cook Jr., which he calls “Pops” and which is included in the exhibit.

“It’s been over 30 years since you passed away,” Cook Sr wrote. “I never thought about how your absence when I was young affected me as a father. It was easier for me not to think about it. I carried that pain with me and passed it on to my sons. I was not the father that I could be. But they forgave me and I have a second chance to make it right.

After long and sincere conversations between father and son, the artist felt something change in him. It wasn’t that the anger was gone, exactly. But over time, the anger became less important. This gave way to other feelings.

“Our relationship is a work in progress,” Cook Jr. said. “One thing you learn about forgiveness is that it can’t come with strings attached.”

To complete the order, Cook Jr. had to take one last photo. He invited his father to his studio at Howard University and pulled out his camera.

“When I look through a lens, I can see people in a different way,” Cook Jr.

In Cook Jr.’s final photograph for “The Great Migration,” Larry Cook Sr. sits on a metal stool, wearing khaki pants and an ochre-colored shirt. Her back is straight and her hands are crossed in her lap. Although the older man is bald and the younger one has long, cascading braids down his back, the first thing most observers notice is how alike father and son look.

In the photograph, Cook Sr. looks directly at the viewer. His eyes are fixed and seem to retain nothing. He seems like a man viewers can trust.

Plan your weekend with our picks for the best events, restaurant and movie reviews, TV shows and more. Delivered every Thursday.

“When I looked through the lens, I could see my father’s pain and trauma,” said Larry Cook Jr., “but I could also see his sense of pride, his energy, his confidence and his love.

“In many ways, I was looking at myself.”

What: “A movement in all directions: legacies of the great migration”