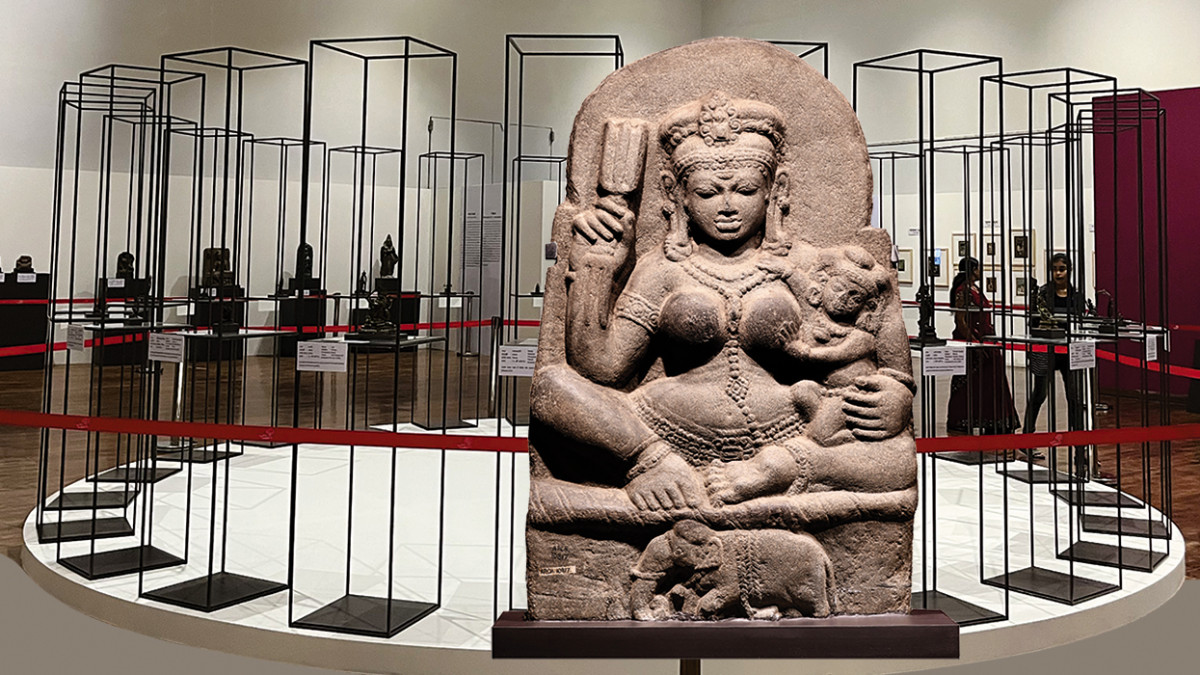 Feminist, feminine and everything in between at Bihar Museum’s ‘Women and Deities’ exhibition

On one of the walls of the museum stands the bust of a straight-eyed woman who seems to grapple with many things – rhetoric, unfreedoms, male hegemony and a narrow view of textbook history that is rewritten to fit political agendas. It could be the female gaze that lands on other female figures in the large room. The futuristic look of Ravinder Reddy’s golden bust emphasizes everyday Indian women, exuding a casual sexuality and embracing the feminine. It’s not a sideways glance. It’s almost a challenge to ways of seeing, almost a reminder to see women as subjects and not as objects. During this exhibition entitled Women and deities– on display at the Bihar Museum in Patna for its 2022 Foundation Day celebrations (it runs until September) – you see more than just relics of the past, or boobs and butts. You see feminine and feminist principles coalescing in resistance against hysteria in the name of religion. It is a timely offer of perspective and hope.

You see a feminist future emerging from the feminine aesthetics of the past, powerful enough to break the glass on what could easily be called feminine, a cultural rather than a political definition. But everything personal is political, whether intentional or not. Culture and politics do not operate in isolation.

The exhibition of 156 works, including 10 contemporary, covers a period of 2,000 years. They are selected in the museum shop. Anjani Kumar Singh, director general of the museum, says it is a tribute to the women of India and Bihar.

The statue of the Didarganj Yakshi from the 3rd century BC. J.-C., found in Bihar, testifies to the scope of this exhibition, from the divine to the temporal. It traces the place of women and their representation at different times, in social and political contexts. Like that of Indrani, the daughter of a demon king, who became the wife of a god.

A 6th century stone statue excavated from Saraikela in Jharkhand depicts the goddess holding a child. Also called Shachi, her sexuality defies all attempts to sanitize Hinduism, in which there is no notion of divine blasphemy. It is an orthopraxic tradition, not an orthodox one. The pantheon is proof of this, and in a way at loggerheads with the extremely reductive definition of religion itself.

Section 295 of the Indian Penal Code criminalizes insult to religion, allowing up to three years imprisonment and fines for “anyone who, with the willful and malicious intent of outrage the religious feelings of any class of citizens Indians, by words, spoken or written, or by signs or representations visible or otherwise, insults or attempts to insult the religion or religious beliefs of any class.

In 1996, Bajrang Dal activists attacked a gallery in Ahmedabad for displaying works by Maqbool Fida Husain, on the grounds that they offended Hindus. He had previously faced court battles, death threats and abuse, after a little-known Hindi monthly from Madhya Pradesh, Vichar Mimansaaccused him of hurting Hindu sensibilities by painting the goddess Saraswati nude in 1976. Husain was eventually kicked out of India.

“Her upper garment was the foam globules and her glorious breasts the sporting rahanga birds. Her romavali, effective in distracting the minds of scholars, was the web of seaweed. Her beautiful locks of braided hair were the rows of bees, and her long eyes, the petals of the blooming lotus.Her navel, dissipating the heat of the feverish, was the whirlwind stirred by the wind… her buttocks were wide banks of shining sand.

—Sridhara, comparing the Yamuna River to a courtesan. Of Sridhara’s Pasanahacariu: The First Four Sandhis of Apabhramsa’s Text. Quoted by Alka Pande in The eternal feminine for Bihar Museum Women and deities exhibition organized by her.

But this painting pales in comparison to the Indian pantheon which is full of robed deities, such as the 6th century stone statue of Lajja Gauri which was found at Kosambi in Uttar Pradesh and is on display.

“There was no fear. This is our story. This is our claim,” Singh says. For curator Alka Pande, the exhibition represents, with beauty and grace, the power of women.

Although depictions of women and deities are unbiased, her audience could be shaped as she is by the colonial strategy of embedding gender into hierarchies and binaries. But it can be circumvented, ignored and dismissed. It’s feminine and feminist. He challenges and resists.

The exhibit places a statue of a dancer among a horde of pantheon goddesses that includes pagan goddesses like Mansa Devi, representing a range of polytheism among the masses. And although some have argued that it was organized monistically, there is a distinct difference in how the Abrahamic religions look at monotheism. Some might even say they all represent the one god in Hinduism.

Whether the goddesses represent one or more, the exhibit is evidence of the empowerment of expression in history, and while many have attributed the female principle to such representation, in the laterite statue exhibited at the exhibit, of the twelve-armed Buddhist female deity Chunda from the 8th century AD, excavated in the Cuttack of Odisha, you see a snake, a book and a noose, among other objects.

Then there is Hariti, a bronze Buddhist goddess who was an ogress and devoured children, but became a protector of children after converting to Buddhism. The goddess is not “the other” as Pande notes, becoming an “inseparable entity in the cosmological order of being structured through fantasy”.

The Dancer of Mohenjo-daro with the decorative terracotta headdress, from about 2nd century BCE, found at Buxar of Bihar, is there too, sharing space with the deities. The exhibition is thus an antidote to “otherness”, but also to the gender inequality that continues to afflict societies, particularly in India.

Museums are the repositories of history and can resurrect suppressed history in today’s world of hateful rhetoric. They are physical manifestations of history and encounters with such a range of artwork depicting women and deities – where there is no attempt to make women aspire to be goddesses as many feminists claim to equate Hindu symbolism of upper caste with femininity – raising issues of marginalization and representation.

Here, in the naked figurines of the goddesses, there is no “honor”. In a country with many regressive practices – from female feticide to the growing obsession with “love jihad” to honor killings that rob women of their agency – the exhibition is a timely reminder, where the compelling history collides with contemporary reality.

(This appeared in the print edition as “The Zeitgeist”)