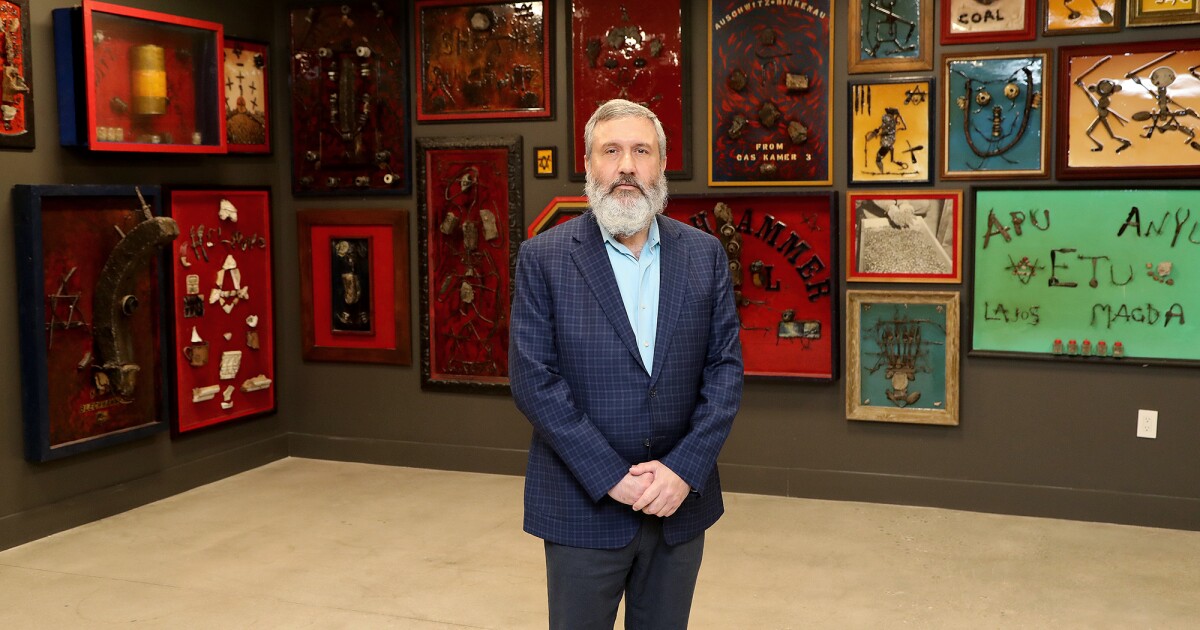 For decades, a Huntington Beach lumber yard was the site of a museum where visitors got a surprisingly honest look at the Holocaust seen through the eyes of someone who had lived through its horrors and survived. .

Ideal Pallet System, Inc. on Cedar Drive was owned and operated by Mel Mermelstein, imprisoned in Auschwitz at the age of 17 and the only member of his immediate family to make it out alive.

Committed to collecting evidence of atrocities committed against the Jewish people at Auschwitz, Buchenwald and beyond, Mermelstein began traveling abroad in 1967, visiting death camps and collecting grim artifacts found there – bullet casings to bone fragments to the remains of barbed wire fences and the structures they surrounded.

These finds, coupled with memorabilia Mermelstein had kept or received for several years, quickly coalesced into a collection of more than 700 pieces, some of which the Long Beach resident will submit as evidence in court to get a ruling from a court. judge in 1981 establishing the Holocaust as indisputable fact.

The collection would be on display in shipping containers at the Lumber Yard, a museum Mermelstein has opened to schools free of charge, his daughter, Edie, said Friday.

“You didn’t even know it was in there, and then you walked in and there was 1,600 square feet of stuff,” she said. “It was really very low – only teachers who knew us came. My father used to tell his director and his employees that they had to stop working while the students were there, so that there would be no noise.

In 1978, Mermelstein created the Auschwitz Study Foundation, a non-profit organization whose board members have embraced its mission to educate future generations about the Holocaust in hopes of inspiring them to live in peace and harmony. Their work will continue even after the lumber yard and the collection are closed to visitors in 2018.

Mermelstein died on January 28 of complications from COVID-19, but his mission continues and plans to expand are underway – his collection recently found a home in Newport Beach’s Chabad Center for Jewish Life.

At a grand opening ceremony in late August, Edie Mermelstein joined ASF board members and Chabad Center leaders in what they hope will become a county Holocaust education center. of Orange.

The exhibition is currently open to groups by reservation and features around 70 objects, including works of art created by Mermelstein from everyday objects and artifacts. The plan is to open the space to the visiting public in the coming months and rotate the items, so the entire collection can be viewed.

Rabbi Reuven Mintz, who heads the Newport Beach organization, said Mermelstein had dedicated his life to serving as a witness and promised the Chabad Center would build on that commitment.

Josh Anderson, a high school English teacher at Huntington Beach High School, has joined the Auschwitz Studies Foundation board of trustees after taking sophomores to study the Holocaust on numerous field trips to the Mermelstein lumber yard and seeing the impact it had first hand.

“They really don’t understand if they just see it in a book or a video,” he said. “When they can see the barbed wire, the Stars of David and the showerheads, it becomes super real.”

Anderson recounted how when Mermelstein was a teenager in Auschwitz, his father told him and his brother that they should separate, to increase the chances that one of them would make it out alive and tell the story of the Holocaust so the world will never forget.

“He did that and he lived to be 95,” Anderson said. “Now it’s Edie’s job, and my job, and the job of the board and all the teachers in Orange County to tell her story.”

Edie Mermelstein, who lives and practices law in Huntington Beach, is currently working on a documentary about her own family’s history called “Live to Tell.” Still busy fielding requests for comment on her father’s passing from The New York Times, The Washington Post and NBC’s “Today” show, she has yet to have time to fully mourn her loss.

Instead, the self-proclaimed “keeper” of the artifact collection, she carries on her father’s mission.

“He was very dedicated and he was just a peacemaker,” she said. “He believed that bringing Auschwitz to the United States would help bring peace and understanding among people. I know his legacy will live on.

Support our coverage by becoming a digital subscriber.