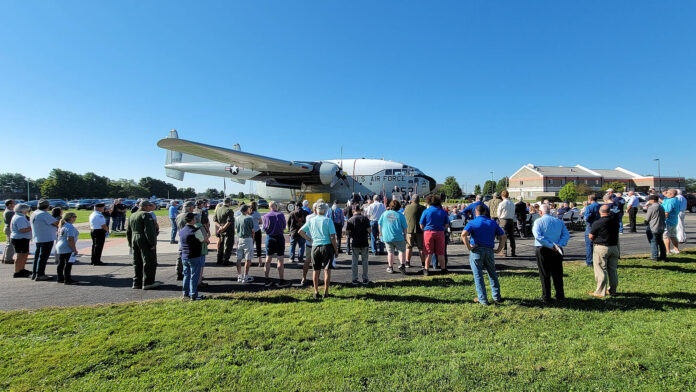 Columbus Municipal Airport Brian Payne emailed Jim Sellars, then president of the Atterbury-Bakalar Air Museum, in October 2018 to tell him about a C-119 plane at the retreat to Wyoming – the same type of aircraft that had once been parked at the local airport. during its days as an Air Force base.

“’I think we can get it. Isn’t this the plane we’ve always dreamed of? Payne remembers saying. “’I have no idea how we’re going to get him back to Columbus.’ And literally, that’s all I said. And I never heard the end of it after that.

Now, nearly four years later, the reassembled and restored C-119 “Flying Boxcar” is on permanent display next to the museum and south of the McDonnell Douglas F-4 Phantom II aircraft, long on display at the airport.

The Atterbury-Bakalar Air Museum held a ceremony on Friday to inaugurate the aircraft, also known as the “Charlie 119”. About 100 guests attended, including volunteers who worked on the aircraft’s restoration, community leaders and veterans.

The museum will also hold a free open house from 10 a.m. to 1 p.m. today, where the public will be invited to view the interior of C-119.

“Charlie now stands as a dedication on this airpark to visitors and the community, to marvel at the craftsmanship these volunteers put themselves through, as well as the soldiers who bravely fought in planes like this for our country,” Payné said.

The museum purchased the plane, which is not airworthy, for $15,000 in 2019. It was disassembled for several months at an airport in Greybull, Wyoming, and flown to Columbus in several hundred pieces. Volunteers then worked to reassemble and restore the aircraft.

“No one on this team had previous aircraft restoration experience, but each brought a special set of skills that blended well with the others,” he said. “As the saying goes, we didn’t know what we couldn’t do, so we went ahead and did it.”

“This is a team that put together 15,000 man hours on this plane, and they did it for donut holes and coffee,” Taylor said.

Firestone noted that while the exterior of the aircraft is complete, there is still work to be done on the interior.

“And just like restoring a classic car, there will always be improvements to be made,” he said.

Charlie 119 will be able to house exhibits on the history of C-119 aircraft and serve as a venue for small meetings.

This aircraft type will also be featured in an upcoming event called “Boxcar Cinema 119”.

The C-119 aircraft played a major role in Bartholomew County’s history when Bakalar Air Force Base (1942-1970) was located at the current location of Columbus Municipal Airport. In the 12 years before its closure, three dozen C-119s were stationed at the US air base. During this time, the people of Columbus saw more Flying Boxcars flying overhead than any other aircraft. The pilots called the planes the “Dollar Nineteens,” according to museum records.

“I remember seeing these planes flying over the city when I was young,” Mayor Jim Lienhoop said during his address at the ceremony. “For a child, Bakalar Air Base was a rather off-putting affair. There were guards, fences and signs warning of dire consequences if anyone wandered inside. But even for a child…there was something reassuring about having the US Air Force around. Even here, in the middle of the country, we have a role to play in the defense of our nation.

Charlie 119 is a reminder of that role, he said.

“If anyone ever asks you, ‘What is the Columbus Way,’ you bring them here to the airport and show them the C-119, Charlie 119,” he said. “It’s the best example we have in this community.

Museum visits fall by 1.4 million, many museums in trouble