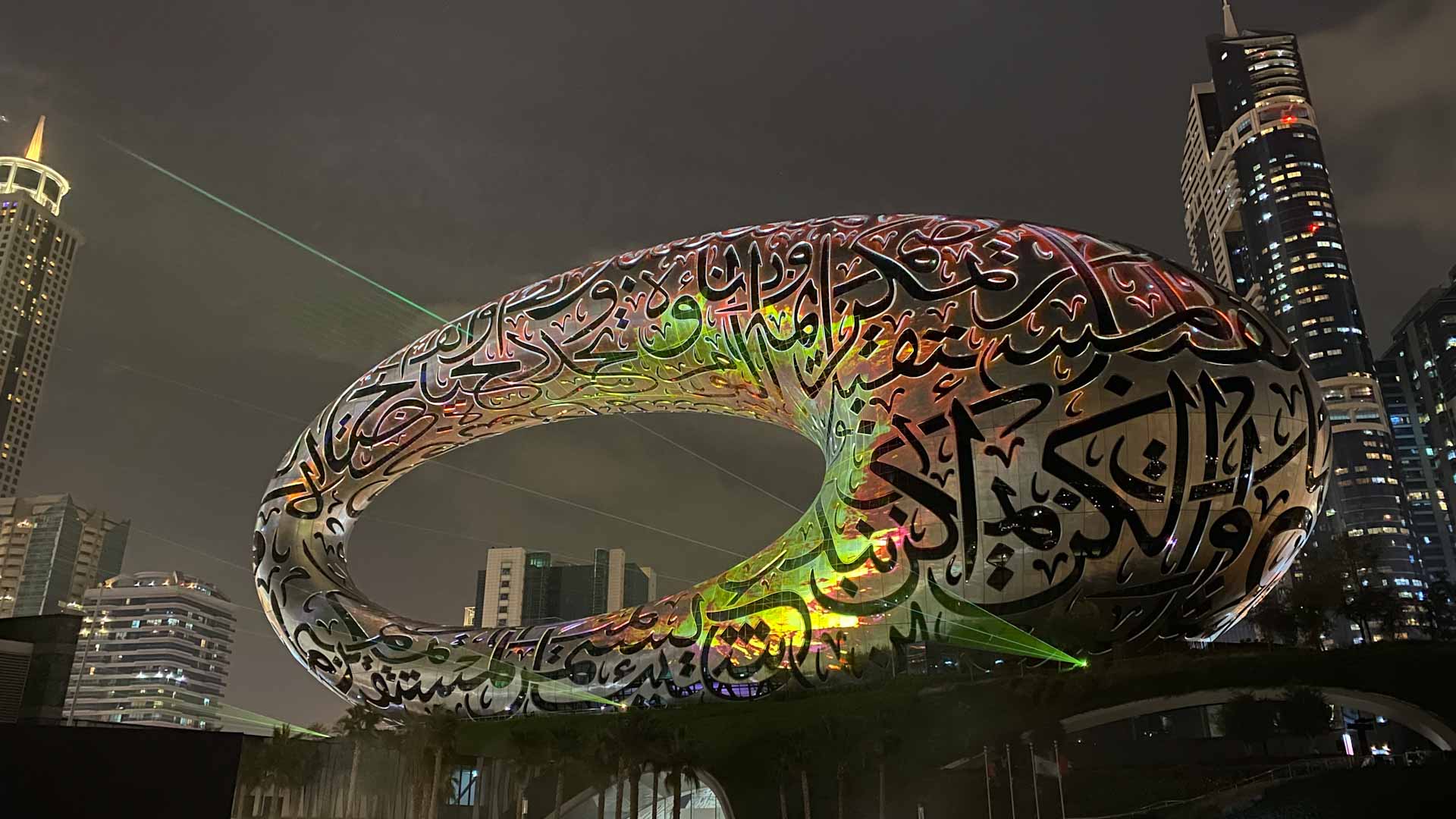 Mohammed bin Rashid inaugurates the Museum of the Future

Sharjah24 – WAM: His Highness Sheikh Mohammed bin Rashid Al Maktoum, Vice President and Prime Minister of the United Arab Emirates and Ruler of Dubai, inaugurated the Museum of the Future today, as Dubai’s new landmark officially opened its doors doors to the world with a new message of hope for all humanity.

The 77 meter tall architectural marvel will provide the region’s largest platform to study, imagine and design the future. It is a new scientific and intellectual center where the brightest talents in the fields of science, technology, research and innovation will converge to discover solutions for the world of tomorrow.

During the opening ceremony, His Highness Sheikh Mohammed said: “The Museum of the Future is a message of hope…a global scientific platform…and an integrated institutional framework to shape a better future for us all” .

His Highness continued, “He embodies the active human imagination and the Emirati will that continues to excel in the world. The Museum will be a forum for great minds, scientists, thinkers and experts from around the world.”

Sheikh Hamdan bin Mohammed bin Rashid Al Maktoum, Crown Prince of Dubai and Chairman of the Board of the Dubai Future Foundation, said: “The Museum of the Future will be an intellectual laboratory for the cities of the future and the governments of the future. . he will play a key role in strengthening Dubai’s future position. The museum will provide a clear roadmap for Dubai’s vital sectors.

Sheikh Maktoum added, “We seek to accelerate the transition to a knowledge-based economy in the region and explore practical science-based solutions to the greatest challenges of our time, today and tomorrow.”

The opening ceremony featured several videos highlighting the concept of the Museum of the Future and His Highness Sheikh Mohammed bin Rashid Al Maktoum’s vision to transform Dubai into the most developed city in the world.

Unveiling futuristic exhibits, the Museum of the Future is a remarkable addition to the world’s most important landmarks and icons. It is considered an unprecedented architectural masterpiece thanks to its pioneering technical design which is ahead of its time.

It will also be an incubator for global talent, scientists, thinkers and researchers to bring their bold ideas and visions of the future to life. The Museum will launch new initiatives in the fields of science and technology to strengthen the UAE’s knowledge base to further accelerate scientific development.

From an architectural point of view, the museum is an engineering marvel. It is the most streamlined building in the world, with no sharp angles on its external structure. It rises to a height of 77 meters and redefines modern architecture through the use of new tools and technologies.

The museum is considered one of the most complex architectural projects in the world. It was built using the “parametric design” model, a three-dimensional technology based on advanced engineering design that works by inputting data and parameters for the building to be designed.

The museum’s stainless steel facade consists of 1,024 panels over an area of ​​17,600 square meters. The facade panels were produced using automated robotic arms in a first in the region, with each panel being made up of 4 layers and requiring a 16-step production process. Each panel was installed individually, with the installation period of the exterior facade lasting more than 18 months.

The museum is accessible via two bridges, the first of which extends to the buildings of Jumeirah Emirates Towers with a length of 69 meters, and the second connects it to the Emirates Towers metro station with a length of 212 meters. The museum is powered by 4,000 megawatts of solar-generated electricity using solar panels connected to the museum.


The facade of the Museum of the Future is illuminated by 14,000 meters of luminous lines and is decorated with inspirational quotes from the poetry of His Highness Sheikh Mohammed in Arabic calligraphy, making it the only building in the world whose entire facade is adorned with the art of calligraphy. . The writing engraved on the steel facade is designed using advanced glass manufactured with new technologies specifically to improve the quality of interior lighting and exterior thermal insulation.

The Emirati artist Mattar bin Lahej designed the words of His Highness Sheikh Mohammed, the writing “Thuluth”, reflecting nobility, originality and permanence, knowing that the writing is one of the most used Arabic scripts in the expression artistic because of its timeless aesthetic.

A roadmap for the future of Dubai.


The Museum of the Future will present a clear roadmap for the future of Dubai and the United Arab Emirates, through which all vital sectors will benefit from future economic, development, scientific and humanitarian opportunities.

Furthermore, the Museum of the Future will be a major laboratory for governmental and non-governmental entities and institutions in Dubai, as well as a factory of ideas and perspectives to understand, design and build the future.

In addition, the museum aims to establish a network of partnerships with the world’s leading scientific and research institutions and centers in order to host and promote in-depth dialogues on future trends that are shaping various sectors of development, economic, scientific, technological and humanitarian.

Covering an area of ​​30,000 square meters, the seven-storey pillarless structure also represents a new world intellectual center. It is a “living” lab designed to foster a spirit of collaborative innovation among leading scientists to inspire new, ready-to-use solutions to tomorrow’s biggest challenges and drive a new era of discovery. science in the region and beyond.

The Museum of the Future seeks to lead the movement of knowledge as the center of the latest cutting-edge scientific and technological innovations.

Additionally, the Museum of the Future will connect futurists, scientists, technologists and industry leaders by hosting regular forums, dialogues, seminars and research sessions throughout the year. The museum will also disseminate knowledge and research that sheds light on the most important scientific discoveries, developments and trends.

The Museum of the Future consists of three main elements: the hill or plateau from which the building rises, the exterior design of the building, and the Museum exhibits.

The Museum uses the latest technologies in virtual and augmented reality, big data analysis, artificial intelligence and human-computer interaction to answer many questions related to the future of humanity, cities, from societies and life on Earth, to outer space.

It also includes innovation labs for health, education, smart cities, energy and transport, a permanent museum of future innovations and labs to generate and test new ideas, particularly in the fields of development related to critical social challenges.

The Museum of the Future takes its visitors on an experiential journey that transports them to the year 2071, which coincides with the centenary of the founding of the United Arab Emirates. The journey takes visitors from a universal world to a personal world, based on an approach that emphasizes the importance of one’s connection to the universe within the framework of a relationship of mutual influence, and promotes the principle of everyone’s role in shaping the future.

The Chile Museum will return the “head” of Easter Island