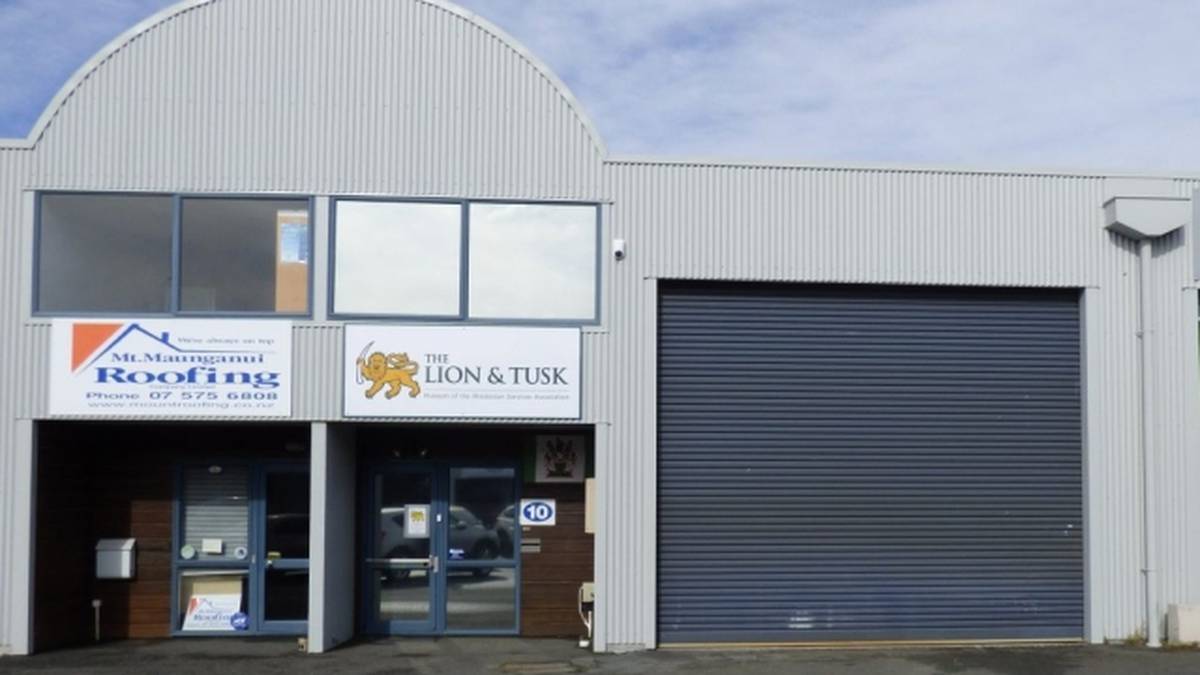 The Lion & Tusk Museum was established in 2018 by the Rhodesian Services Association, which is dedicated to commemorating the military history of Rhodesia (now known as Zimbabwe and Zambia).

The museum was the subject of heated discussion after a video was uploaded to TikTok earlier this year.

The top liked comment on the video reads: “I think most people in Tga (Tauranga) have never heard of it or know what Rhodesian is about. I’m shaken [sic] – I lived there most of my life until last year.”

Rhodesian Services Association editor Hugh Bomford said they had successfully applied for Te Papa’s $2,000 grant to help pay the salaries of their curators.

Te Papa confirmed that Lion & Tusk received the money as part of the Helping Hands grant in April last year.

A Te Papa representative said the grant eligibility criteria have been expanded to include support for operational costs – including salaries and wages – due to pressures caused by Covid-19.

They declined to say whether the museum supports white supremacy.

“Rhodesia is so critical here because an organization like the Rhodesian Services Association not only celebrates white supremacy as a structure, but a military structure capable of committing serious forms of violence to control black people, indigenous peoples and people of color,” he said. said.

The Lion & Tusk Museum has Professor Dutta worried about the spate of racist incidents in Tauranga this year.

These include the anonymous distribution of white supremacist flyers among homes in the area, bus drivers experiencing racial abuse and threats, and Te Pāti Māori’s refusal to stand as a candidate in the recent by-election due to threats from white supremacists.

“For security and policing, this is something worth considering carefully, because the fact that these speeches are coming from the same geographic space is concerning.”

Dutta said the use of Rhodesian symbols has become popular recently, as Nazi symbols have been either banned or condemned.

“We have certainly seen an upsurge in Rhodesian symbols as they allow white supremacists to identify with each other, but also to recruit others into this ideology.”

Dutta questions whether public funding should be used to support what he described as a “racist infrastructure”.

“A lot of times we will find quite traditional politicians who are actually connected to these organizations. I think that needs to be looked at closely,” he said.

“We see this as a global phenomenon, including in Australia and New Zealand, where people recruited into these white supremacist organizations sometimes have military connections, as evidenced by the museum’s association with the donor and veteran of the ‘US Army, Kevin Smith.’

Museum curator Tony Fraser said Lion & Tusk’s aim was to give soldiers, ex-Rhodesians and Zimbabweans a place for their memorabilia.

“There are exhibits from all walks of life, with a distinct leaning towards the military service of these people,” he said.

Fraser is not Rhodesian or Zimbabwean himself, but lived in Zimbabwe in the early 80s and wanted to “give back”.

“I have no political affiliation with the place. I am in favor of the story and that should not be forgotten.”

He also disagrees with Rhodesia being portrayed as white supremacist.

“They were just people trying to make a living – like New Zealanders do.”

Fraser says New Zealanders like the late Garfield Todd are commemorated at the museum.

Todd was an Invercargill-born man who moved to Rhodesia in 1934 as a Protestant missionary to run a school and eventually became Prime Minister there.

During his political career, he championed many policies aimed at improving the lives of the black majority in Rhodesia.

He was later condemned as a traitor by white Rhodesians for coordinating the isolation and embargo of Rhodesia and supporting the legitimization of black nationalist groups.

Fraser argues that the Lion & Tusk is “not a political museum” and that it is important to remember the positive and negative parts of history.

The infamous Rhodesian Prime Minister, Ian Smith, who campaigned for a “whiter and brighter Rhodesia” and opposed black majority rule there, is also commemorated by the Lion & Tusk Museum.

“We celebrate the military history of a colony that fought for the British Empire, just as New Zealand did.”

According to Fraser, the majority of the museum’s funding comes from membership and online sales of memorabilia and military badges that people can wear on their berets on Anzac Day, so that “non-political ex-servicemen “may commemorate their dead.

Dutta thinks this could mean events like Anzac Day are being co-opted by white supremacists.