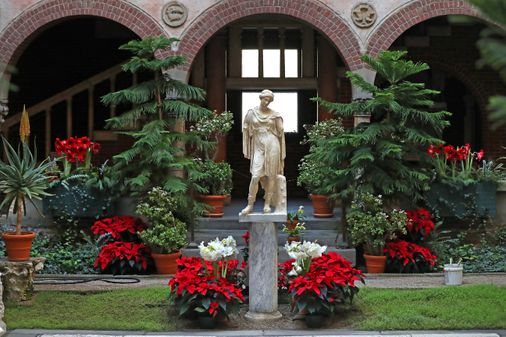 It’s the world’s most infamous art theft, an unsolved mystery that for the past three decades has inspired articles, newsletters, books, documentaries, podcasts and even artistic projects.

Now the 1990 theft of 13 works of art from the Isabella Stewart Gardner Museum is getting the Netflix treatment:It’s a flighta four-part documentary series created by Boston-area natives Nick and Colin Barnicle.

The project, which kicks off on April 7, took years to prepare, as the Barnicle brothers searched for legal documents, sifted through 30 years of leads and persuaded sources to sit down for interviews on camera.

Director Colin Barnicle said that although they checked “every possible theory”, most of this research does not appear on screen.

“We were trying to make a roadmap, but not one where you can go off on 18 different exit ramps,” he said. Rather, they wanted to show “the most likely flare of what happened that night and in the first year after the crime.”

However, the question remained: how to shed new light on the Gardner heist, the great white whale of artistic crime, in which two thieves disguised as police officers stole works by Rembrandt, Degas and Vermeer in the early hours of March 18, 1990?

“We wanted to take the viewer through this as if it were happening at that moment,” Colin Barnicle said. “They all have the ups and downs of getting closer to discovering art. You get really high and then you come crashing down because it’s like it’s slipping through your fingers.

The documentary series is a first for the Barnicle brothers in more ways than one. The brothers (sons of journalist and former Boston Globe columnist Mike Barnicle) are best known for producing sports and music films, including the New York Emmy Award-winning “Billy Joel: New York State of Mind.”

But Nick Barnicle, who along with his brother is listed as executive producer, said they had been working on the documentary for so long that it no longer felt like new ground.

“Even though we were sort of known as the sports-doc guys, we were still working on that on the side,” Nick Barnicle said. “We’ve always been interested in that.”

Colin Barnicle said the series builds on the work of previous investigators who “laid the groundwork” and includes interviews with a number of current and former Globe journalists, crime investigators, museum workers and others associated with the case.

“Even if you’ve read all the books, if you’ve listened to anything on them, there will be new stuff in there,” Colin Barnicle said. “And we come to a conclusion.”

So who did it?

“It’s a case that lends itself to a lot of mystery,” Colin Barnicle said. “I would say that we identify the people who entered the museum.”

The Federal Bureau of Investigation made a similar claim in 2013, when he announced he had identified the thieves, but declined to name them, citing the ongoing investigation. Yet there were never any arrests and the location of the art, valued at $500 million, remains a mystery despite a $10 million reward.

The brothers describe the series as a treasure map, giving viewers powerful clues and insight into what happened that terrible night in the Fenway 31 years ago.

“I think we’re shining the brightest light possible on every detail,” said Nick Barnicle, who said he hopes Netflix’s massive reach can help solve the crime. “At the end of the fourth episode, you have so many different details at your disposal… who knows?

The history of the Berkshire Museum art sale is hitting the symposium circuit. Critics denied spot on panel | Local News