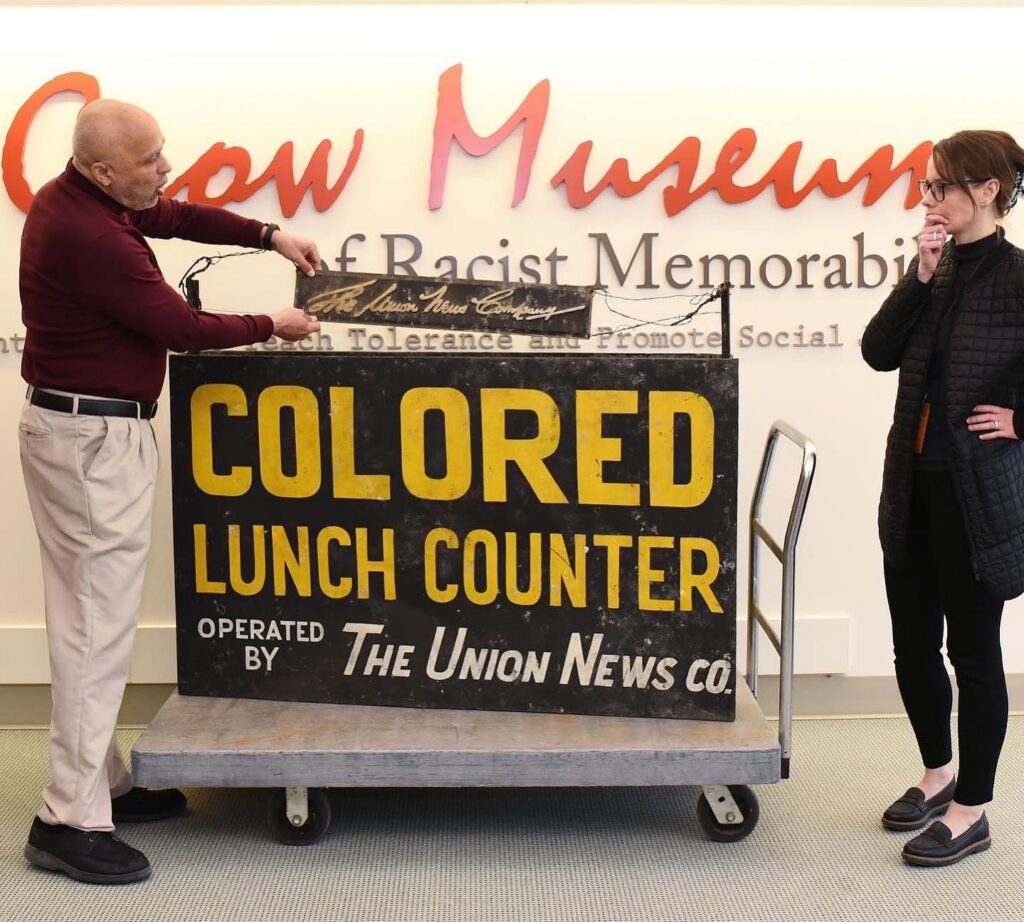 The Jim Crow Museum’s latest addition to its collection of thousands of racists artifacts was contributed by Mike Wolfe of “American Pickers”.

The Jim Crow Museum is a space where individuals come to learn about the racism that has happened and continues to happen in our country.

Because the museum houses thousands of artifacts and pieces that share the stories of African American life under Jim Crow, they are unable to feature everything they have at this time, including a new piece brought by Wolfe.

Wolfe, who travels across the United States in search of antiques and artifacts, found a black, yellow and white sign that read “colorful lunch counter”.

Wolfe reached out to David Pilgrim, vice president for diversity, inclusion and strategic initiatives, about the article he found.

Wolfe agreed to donate the sign at no cost, including transportation costs. In a statement to the university, Wolfe said: “I have always believed it is our duty to preserve history so that we can learn from it. I knew this piece was to be donated to the Jim Crow Museum in Michigan, which uses objects of intolerance to teach tolerance. This sign will now take on new life to educate, remind, and inspire everyone to greater understanding, acceptance, and unity.

Pilgrim said the panel is a very rare piece and will become one of the museum’s featured pieces when the new building is in place.

The Jim Crow Museum is set to have a new home in the coming years as the university has approved ideas to create a building so the museum can stand on its own, share and develop stories, display all of the artifacts it has and allow individuals to educate themselves.

Ann Breitenwischer, research and teaching librarian, says this museum is important for students of all majors to understand.

“In particular, it doesn’t matter which program they attend, because everyone is affected in one way or another,” Breitenwischer said. “You can study pharmacy and there is some impact, but obviously if you are in a program like social work, social justice or education, I think it will have a greater impact. There is always the impact of the trading side of a coin.

As new pieces are brought into the museum, they contribute to the stories that make up so much of history and enable individuals to learn and, as Pilgrim puts it, “to be part of a better America”.

“I believe a better America is possible, and I believe we can all be part of it,” Pilgrim said. “This museum, my life’s work, is my attempt to be a part of it.”

The museum, which currently resides on the ground floor of the FLITE Library, was moved there in 2012 to not only accommodate the growing number of artifacts being collected, but also to provide the public with easier access to the museum.

Pilgrim came to Ferris as a professor of sociology in 1990, bringing with him around 3,000 artifacts he collected over the years, using them as teaching tools in his classes.

“Jim Crow was a name for the racial hierarchy in America that had whites on top and colored people below,” Pilgrim said. “A lot of people, when they think of Jim Crow, they think of laws, ‘whites only’ signs, that sort of thing, but really, Jim Crow was a way of life. It was a racial caste system.

In the mid-1990s, the museum was originally housed in a 500 square foot room on the third floor of the Starr Building, which now houses the Museum of Sexist Artifacts.

The decision to move the museum from the Starr Building to the FLITE Library was meant to expand the stories that visitors came to see.

“The room we had was visual storage,” Pilgrim said. “But you couldn’t tell the stories you needed to tell, you couldn’t develop the stories. Right now we have over 20,000 pieces, so obviously we can’t stay in a small room. This is actually one of the reasons why we have to move to new facilities.