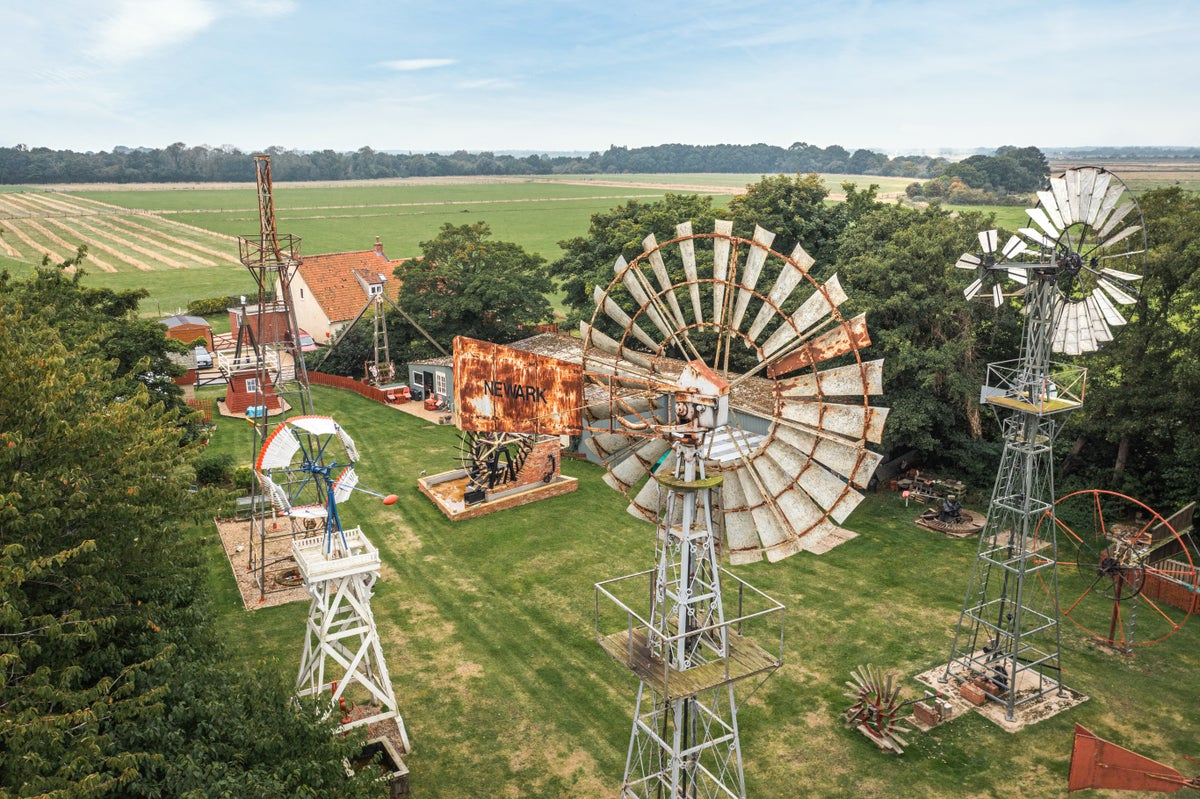 In the middle of the Norfolk Broads, an unusual assortment of 10 historic mills rise above the flat land and labyrinthine waterways below. 1920s ago wind motor with rotating sails; a large bucket wheel, originally used to drain the marsh; a steam engine with a turbine, called Holmes Engine – the last that exists today.

This is The Wind Energy Museum, showcasing 200 years of wind energy history and the only such collection in the UK. Almost three miles away is Thurne Mill, a 202 year old white pump mill facing the River Thurne.

It is also the home of Debra Nicholson, where she lives with her husband Philip, her 91-year-old mother, daughter and two grandchildren. But when she moved to Norfolk in 1998, running around and living in the country’s only wind energy museum was not something she had planned. It is the fruit of a friendship that began almost by chance.

With a background in international banking, Debra had moved to the Essex area with Philip, planning to retire and spend time with their two young children. Without a job and with Philip working outside the home during the week, Debra found she didn’t know anyone – and had some free time.

At 45, she decided to do a bachelor’s degree in photography, choosing Thurne Mill, which she had visited on vacation as a child, as the subject of her portfolio. When she went to photograph the mill, she noticed a plaque on its door, reading: “Saved in 1949 by RD Morse”. At her daughter’s suggestion, Debra decided to find the R.D. Morse mystery in the phone book, doubting that he was even alive.

The phone rang, however, and Ronald “Bob” Morse picked it up.

Engineer, he was fascinated by wind mill and wind pumps, and had bought Thurne Mill in 1947, the restaurant to save it from demolition. He collected 19e and early 20e century wind turbines from around the world, displaying them in the museum.

Bob invited Debra to visit him at Marsh Cottage, who dug up detailed stories and details of Thurne Mill’s restoration. They stayed in touch during Debra’s A-level, and when she passed, she called him to thank him for his help.

“He cleared his throat — I can hear it now — and he said, ‘You’ll have to excuse me, I haven’t spoken to anyone in a week.’ says Debra.

“The swamp is such a nice place to be, but it’s pretty isolated if you’re on your own. I decided to keep in touch with him. I called him every evening at a quarter to six. If I didn’t call him, he called me. Gradually, he became part of the family.

Debra took Bob shopping on Friday mornings; together they visited mills in the area and he celebrated Christmas with his family. “Out of the blue, he said to me, ‘I wonder if you’ll take care of the museum after I’m gone.’ It was a big challenge, because I’m not an engineer.

Debra brainstormed with Philip, who encouraged her to do it. In 2003 they moved to Repps with Bastwick, where the museum is located, and built a log cabin to live in, called Marsh View. Debra started working at the museum, with Bob teaching her his story.

“As a child, I absolutely adored the mill, without even knowing what it was. When I got here and got access to the connection, it became a bug,” says Debra. “We have Norfolk’s 200 year drainage history right here in the museum, as Bob saved a scoop wheel, which was the first drainage system – every windpump around the Broads would have had one.”

She adds: “It’s just interesting to get in there and learn for yourself – and develop little models that show things in an even more complex way for the public… I’ve been doing it for so long. came to mind. I haven’t had much life outside of that, really.

In 2007, however, Bob passed away suddenly. Debra was left in charge of the museum, its 10 exhibits and Thurne Mill.

“I felt proud to be completely honest. It never put me off, which is a good thing,” she says, thanks to advice from Bob. With the help of her father and Philippe, the gardener , they are leveling the ground, cutting undergrowth and restoring the site to working order, they have also restored Marsh Cottage, the three-bedroom property dating back to the 1700s, transforming it into a comfortable 1,428 square foot home.

At first, business was slow. It was six weeks after opening that their first customer arrived – while Debra was on her lawnmower. But the number of visitors has increased, especially after the lockdown in 2021.

Now, however, Debra has her hands full. Philip has been diagnosed with MS and can no longer walk. And, after her father died, her mother moved in with her. Being run by volunteers, it has become difficult for Debra to open the museum as much as it takes to stay afloat.

” It was great. I loved. If I weren’t in the situation I am in, I wouldn’t even consider moving. It’s a nice place to live – you can go out in your pajamas, you can yell at the dog and the grandkids love it.

After 15 years in Debra’s care, the 2.84-acre site – including the museum, Marsh Cottage and Marsh View – is up for sale with Sowerby. The Grade II listed Thurne Mill, which has its own mooring, is sold separately by City & Country.

The museum occupies part of a 3,924 square foot barn, while five other outbuildings are included in the sale. The museum site is currently listed for £1million, while Thurne Mill is £200,000, up for auction online.

Ideally, Debra is looking for a buyer who will buy both properties, preserve them for posterity, and keep the museum open. “I would absolutely love someone to come in here and replace me. It would be my dream come true. I don’t know what the chances are of that happening. I have to find the right person – I wouldn’t want him to whatever happens. It’s the only collection of its kind in Britain,” she says.

“It’s too important to lose, so if things go wrong I’ll still be where I am unless I find someone else.”

If the right buyer presents itself, Debra is considering relocating locally and would appreciate the chance to continue contributing to the museum in an advisory capacity. “Only I know Bob and his lifestyle; how he was. I think it’s an important story,” she said.

“What will I miss the most? All this: the views, the location, the peace. And the pride of what’s across the road. I’m really proud of it. I will miss it – I know I will miss it.