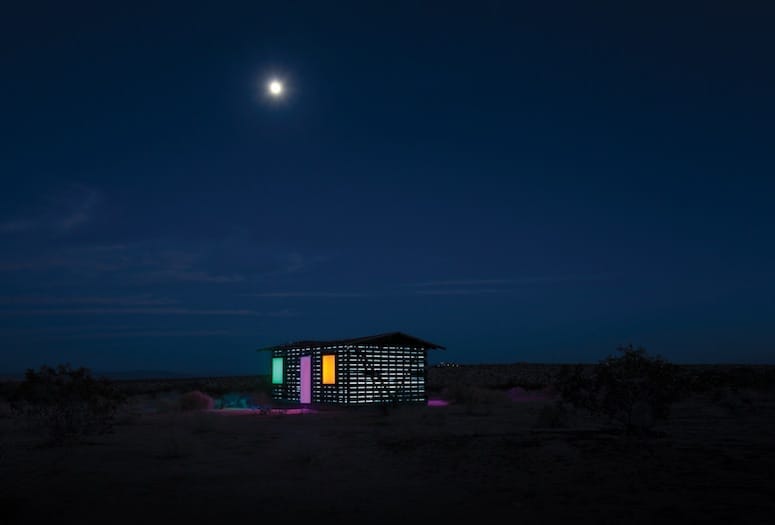 The roots of Lightworks go back to Opening, his first light-based installation, premiered in 2010 while he was the artist in residence at the Palm Springs Art Museum. “Much of my early work dealt directly with light and shadow, often working in monochromatic fashion,” says Smith. “It was only after Opening that I really took the color straight away.

Opening and a mirror-polished stainless steel sculpture he created for a site in Oklahoma City signaled the coming of Smith’s seminal work, Lucid stability, which would make his High Desert property a social media sensation.

In 2013, Smith, who is married to Modernism Week executive director Lisa Vossler Smith, decided to “do something” with his High Desert cabin. In the studio, he began experimenting with photographs of the dilapidated structure and creating the first renderings of what would become Lucid stability. “I believe in the brewing process,” he says. “I haven’t drawn on this thing for eight years, and then one day it was like, boom, It was there.

Lucid stability has come to life as an ephemeral monument in the light of the desert – a weathered wooden shelter with polished mirrors replacing the door, windows and any other horizontal beams to reflect the surrounding landscape by day and to project fields of color at night.

“These are four ideas: light and shadow (the interaction with the sun), reflected light, projected light and change,” says Smith, his head buzzing showing a hint of gray. “It varies considerably from sunrise to 9:00 am, noon, 3:00 pm, dusk and into the late evening. At dusk, there is the reflection of the sun inside as the windows and door slowly move through the LED-powered color wheel. The projected light comes from inside and reveals the structure – the two-by-fours, the diagonal bracing – like lines of light that wrap around the cabin. The four windows and the door, you are not fully aware that they are changing. It’s about slowing down, stopping, and being quiet so you can see and listen.

Currier Museum: An artistic installation reflects the anniversary of September 11