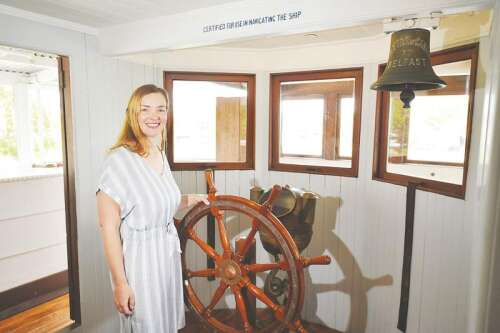 The Tairāwhiti Museum has received a rave review from national media website Stuff and museum director Eloise Wallace couldn’t be happier in these demanding times for Omicrom.

“It’s good to see great reviews and to have the museum featured nationally,” she told the Gisborne Herald.

The article – titled World Famous in New Zealand: Tairawhiti Museum, Gisborne – describes the museum as modern, innovative and packed with stories and artifacts.

The Star of Canada started the Stuff article by asking why would you go there?

Stuff’s response was “where else can you stand in a wheelhouse that’s become a real home and then a museum exhibit?”

The article went on to praise the museum for its rich collection of Maori taonga, European history and social history.

There was also praise for the art gallery, including “a dazzling selection of Lalique glass vases and intricately embroidered kimonos” and the “cute” Wyllie Cottage.

The Stuff article was written as part of a Trust Tairāwhiti campaign to promote tourist facilities and Ms Wallace thanked them for their support.

The past six months have been difficult for the museum, she said.

Summer was normally the busiest time but Covid had had a significant impact.

“We have been unable to manage our usual schedule of events – everything from exhibition previews to hospitality functions to school holiday programs – and this has had an impact on visits .”

“Although we weren’t affected as much as other museums and galleries nationwide, it didn’t work as usual at all.

“We have continued to run our school program through the first term, but offering more outreach and kura-based programs, and have had to restrict the number of school groups we can have in the museum at any one time.

“The calendar is full and we have welcomed many school groups, especially those who wanted to take the opportunity to visit Tū te Whaihanga before it closes.

“Our exhibition program has been able to continue largely as planned and we are grateful to all the artists who have worked with us during this time.

Taonga from the exhibition Ko Rongowhakaata: The Story of Light and Shadow which recently concluded at the Museum of New Zealand. Te Papa Tongarewa returned home on Saturday and many of these taonga will eventually be on display at the museum again.

“Tu te Whaihanga (sacred taonga that left Tairāwhiti 250 years ago) closes on May 1, so there is only one month left for people to come and see this exhibition.

“We have a full program of exhibitions for the rest of the year, but the impact of the pandemic continues.

“A special exhibition that we are looking forward to hosting from May 26 is Let Me Be Myself: The Anne Frank Story, which is a traveling exhibition developed by the Anne Frank House in the Netherlands.”

Mrs. Wallace said the winter would be busy.

“We look forward, fingers crossed, to being able to welcome more national and international visitors to the museum again as the year progresses.”

The obligation to present a Vaccine Pass ends on April 4, but visitors aged 12 and over must still wear a mask and practice physical distancing in the museum.

Ms Wallace said there would be further restrictions.

“As we remove these protective measures in accordance with government advice, we will always take a very cautious approach.”

AT THE HELM: Eloise Wallace, Director of the Tairawhiti Museum, at the wheel of the Canada Star. A review of the museum on the Stuff website states “where else can you stand in a wheelhouse that has become a real home, then a museum exhibit?” Photo by Liam Clayton

Why is a virtual work by Veronese in a physical museum?

Did you know the Museum of Memories?