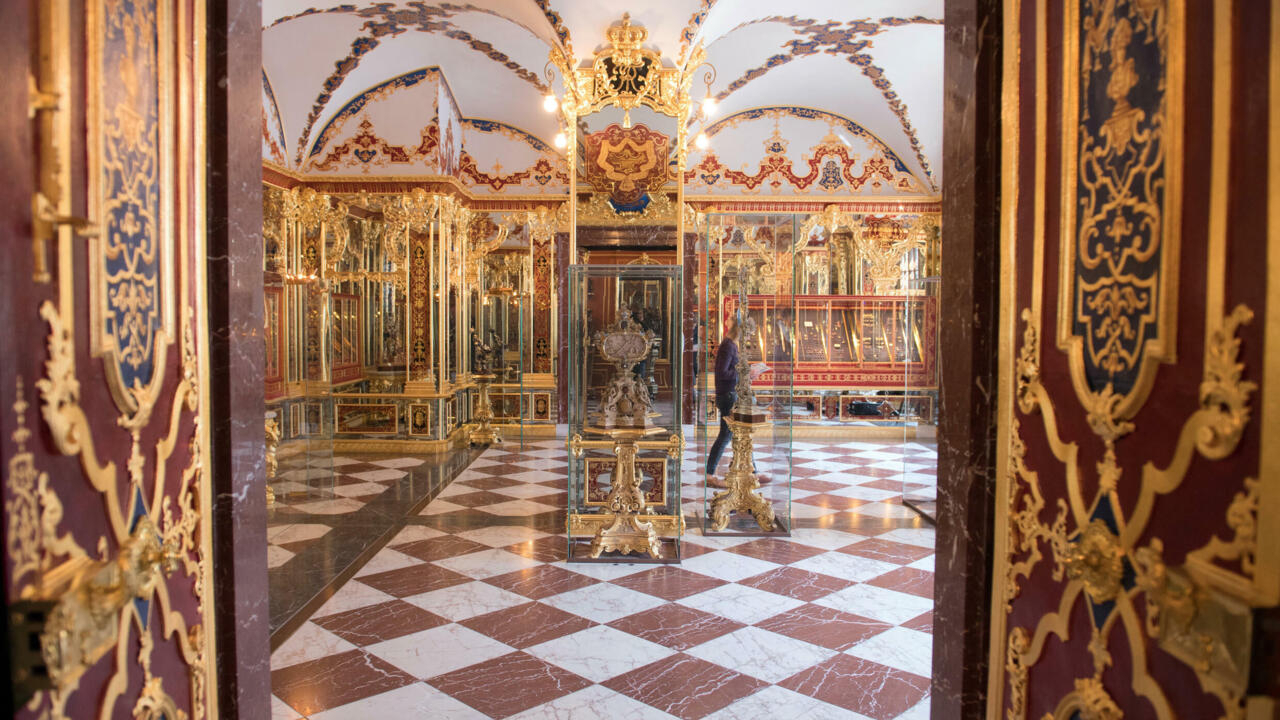 Six trials for spectacular theft of jewelry from a German museum

Berlin (AFP) – Six members of a notorious criminal gang are on trial in Germany on Friday for a spectacular heist in which 18th-century jewelry was snatched from a state museum in Dresden.

The suspects, aged 22 to 28, are charged with gang robbery and arson following the brazen nighttime raid on the Green Vault museum at the Royal Palace in Dresden on November 25, 2019.

To this day, there is still no trace of the jewelry, including a sword with a diamond-encrusted hilt and a shoulder pad that contains Dresden’s famous 49-carat white diamond.

When the men were charged last year, prosecutors described the museum exhibits as “extremely significant in terms of art and cultural history”.

The thieves took just eight minutes, knocking out the power and entering through a window they had previously tampered with.

Two men armed with an ax then burst into the showroom and stole the jewelry before fleeing in a car, which they set on fire in an underground car park.

Thieves seized 21 jewels and other valuables from the collection of Saxon ruler Augustus the Strong, encrusted with more than 4,300 individual diamonds.

Insurance experts say the loot is worth at least 113.8 million euros ($128 million), with German media calling it the biggest art theft in modern history.

However, the director of the Dresden State Art Collection, Marion Ackermann, refused to assign a value to the stolen items, calling them “priceless”.

The stunt also caused damage worth around one million euros to the museum and parking lot.

Police combed through CCTV footage to identify the suspects, all of whom are members of the so-called “Remmo clan”, an extended family known for its links to organized crime in Germany.

The survey was named “Epaulet” after the glittering shoulder pad.

Three of the suspects were arrested after 1,600 police raided 18 Berlin properties in November 2020.

Two others – twin brothers named by police as Mohammed and Abdul Majed Remmo – were on the run for several months, but were arrested in December 2020 and May 2021 respectively.

The Remmos were previously involved in another mind-boggling museum robbery in the heart of Berlin in 2017, when a 100-kilogram (220-pound) gold coin was stolen.

Two of the suspects on trial for the Dresden robbery are still serving juvenile sentences for their involvement in the theft of the gold coin, which has also not been found.

The ‘big maple leaf’, believed to be the second-largest gold coin in the world after Australia’s one-tonne kangaroo, has been snatched from the prestigious Bode Museum in Berlin.

In 2020, investigators targeted the Remmo family with the seizure of 77 properties worth a total of 9.3 million euros, accusing them of having been bought with the proceeds of various crimes, including a bank robbery in 2014.

The Dresden trial, which is expected to run until October, is being heard in juvenile court because two of the suspects were minors at the time of the crime.

In addition to the six main suspects, four other men are under investigation, suspected of having aided and abetted in exploring the crime scene the day before.

Founded by Augustus, Elector of Saxony, in 1723, the Green Vault is one of the oldest museums in Europe.

After the Royal Palace suffered severe damage during World War II, the museum remained closed for decades before being restored and reopened in 2006.

Experts have warned that the chances of recovering the stolen jewels are slim, with the gems likely to have been re-cut in the time since the crime.

Civista Bancshares (CIVB) is expected to announce its results on Friday