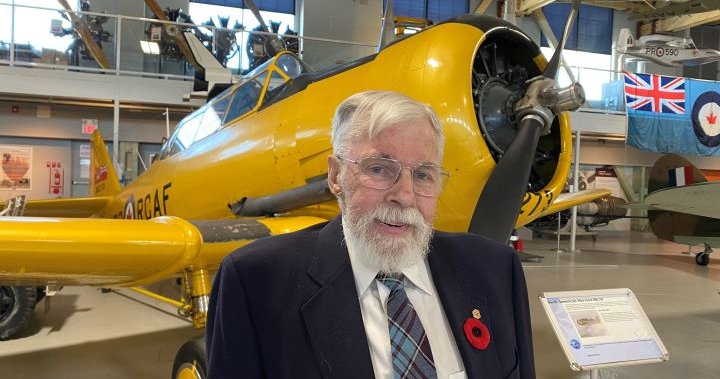 ‘Some of our heroes’: Calgary museum salutes veterans in a new way this Remembrance Day – Calgary

A Calgary museum is looking forward to inviting the public to a Remembrance Day ceremony again this week. This comes as new exhibits at the facility pay tribute to the service of Canada’s military veterans.

The Hangar Flight Museum in northeast Calgary will hold its Remembrance Day ceremony on Friday, November 11.

Among the participants is John Melbourne, a retired pilot who served in the Royal Canadian Air Force.

“A big part of Canada’s history is our military history, and the thousands and thousands of men and women who gave their lives to this country,” Melbourne said.

Attendees and participants will salute this sacrifice in the first large-scale public Remembrance Day ceremony since 2019.

The story continues under the ad

“We are very pleased this year to have Remembrance Day service back to normal,” said Brian Desjardins of the Hanger Flight Museum.

Those attending the event can explore new exhibits: the first items unpacked as Canada’s Aviation Hall of Fame leaves its longtime home in Wetaskiwin, Alberta. and move into the Hangar Flight Museum.

“A lot of these planes you see here were flown by our Hall of Fame inductees, some of our heroes,” Hall of Famer Jody Weyman said. “It goes without saying that the two come together.”

The Memorial Day Ceremony at the Hangar Flight Museum begins at 10:30 a.m. on Friday, with the facility’s doors opening to the public at 9:30 a.m.

“Remembrance Day means a lot,” Melbourne said. “The only thing is that we should remember our people not just one day but every day of the year, and just thank our lucky stars for living in a country like ours.”