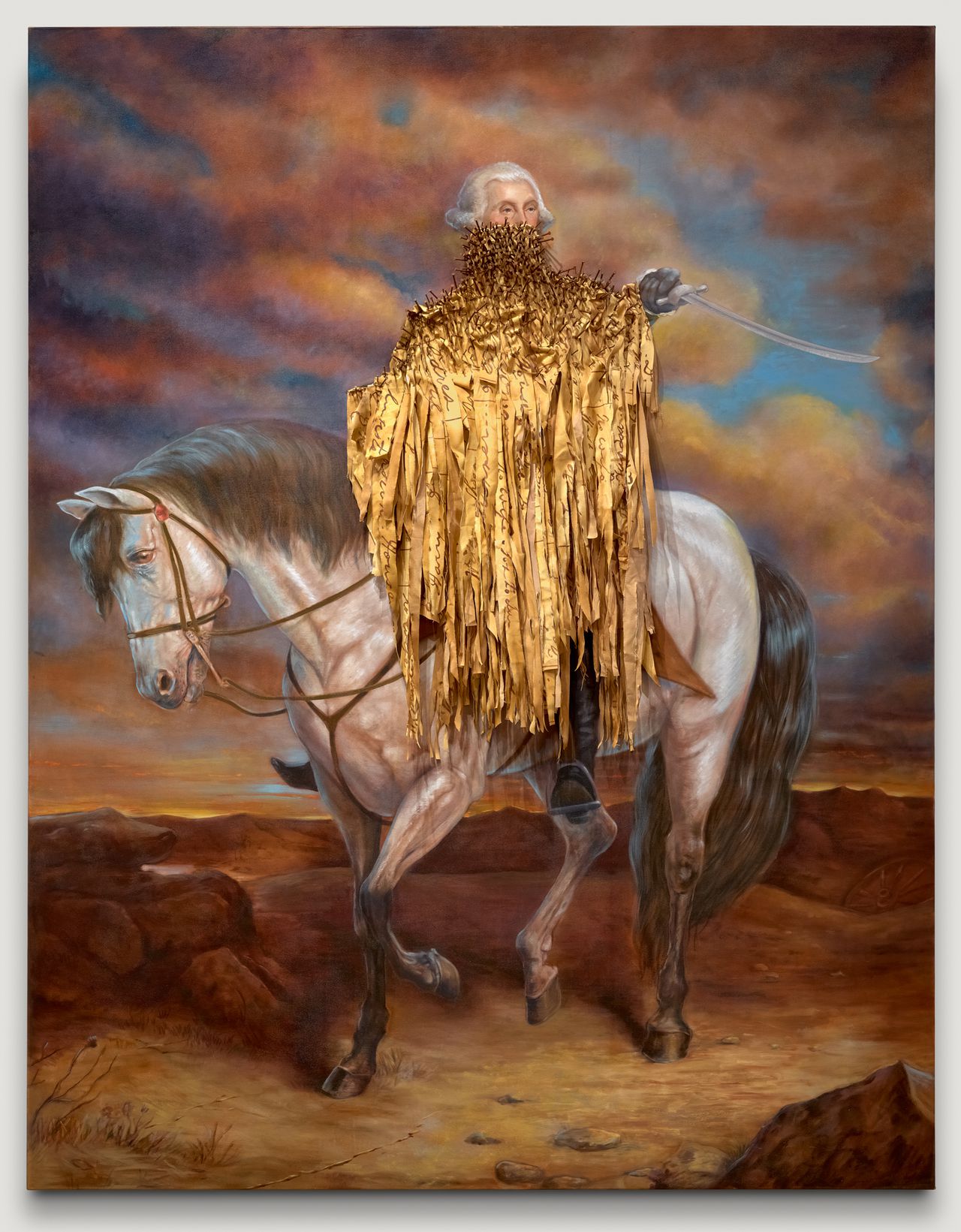 CLEVELAND, Ohio – The Cleveland Museum of Art, once a bastion of contemporary art conservatism, is bravely engaging the rising culture wars over America’s race history in the best possible way, exhibiting works powerful black artists rooted in this history.

The museum’s new exhibit, “Currents and Constellations: Black Art in Focus,” which opened a week ago, showcases the myriad ways in which some of the country’s leading 20th and 21st-century black artists have responded to the American racial divide.

The show could be seen as part of the wave of exhibitions in art museums across the country focusing on race and diversity following the police killing of George Floyd in Minneapolis in 2020. In truth, the Cleveland Museum began increasing the frequency of exhibits dedicated to African American artists in 2013 with an exhibit on 20th-century expressionist and folk painter William H. Johnson.

The new exhibition, however, is one of four currently on view that focus on works by women and minorities, and artists who straddle these categories. The show is particularly timely given that it coincides with the increasingly bitter national debate over how the history of slavery and racism should be taught.

Conflicts over the teaching of this history include the racial politics that led to the recent recall of leftist school board members in San Francisco. Meanwhile, despite the derision of left-wing cancel culture, conservatives are working to ban books from school libraries and empower citizens to sue school districts over conspiracy theories that children are force-fed with college-level teachings in critical race theory.

Curated by Key Jo Lee, newly promoted from Director of Academic Affairs and Associate Curator of Special Projects to Associate Curator of American Art at the museum, “Currents and Constellations” takes the position that Clevelanders are ready to consider how African-American artists Americans approached subjects which continue to agitate the country.

On display are prints by Elizabeth Catlett and Cleveland artist Darius Steward that explore depictions of the Black family, works by photographer Dawoud Bey and painter Torkwase Dyson that evoke journeys from slavery to freedom, and paintings by Norman Lewis and Jack Whitten and a sculpture by Richard Hunt that explores whether the black experience in America can be communicated through abstraction.

Other works could be seen as deep cultural responses to police violence against unarmed black people, the sexual liberties taken by slavers against black women, and reflections on the persistence of oral traditions as a means of coping with the cultural erasure and denial of education to enslaved black people. Americans.

The exhibition centers on 17 works from the museum’s Focus gallery, but includes nine others installed in four permanent collection galleries in a way that shows how works by black artists could reveal new understandings of the museum as a whole.

Most of the objects in the exhibit come from the museum’s growing collection of works by African American artists, which now number more than 700 objects. Key works are also loaned by artists and collectors.

The artistic viewpoints represented in the exhibition are very diverse, ranging from social realism to abstract, conceptual expressionism and beyond. Virtually every major work on display represents a school of thought or approach that could be the subject of its own exhibition. In this sense, Lee’s exhibition feels like a sketch of something much bigger and more complete.

One installation offers a particularly vivid demonstration of Lee’s approach. In Gallery 204, devoted to art from the colonial and revolutionary period, the curator has installed “Shadows of Liberty,” a 2016 painting by MacArthur “genius grant” winner Titus Kaphar, who is also depicted in the current “Motherhood” of the museum. “exhibition.

The newly installed Kaphar painting is a reinterpretation of a hackneyed equestrian portrait of George Washington painted by little-known artist John Faed in 1899 that now belongs to the Tuscaloosa Museum of Art in Alabama.

While visually quoting the hero-worshipping Faed portrayal, Kaphar subverts its meaning by largely obscuring Washington’s face and upper body behind strips of tea-stained canvas bearing the names of the more than 300 slaves he owned.

The canvas ribbons are attached to the board with rusty nails in the style of a traditional studded African power figure, or nkisi nkondi, an example of which is displayed in a nearby display case.

Kaphar’s painting also hangs next to a 1779 portrait of Charles Willson Peale and his workshop depicting Washington at the Battle of Princeton, standing confidently in a graceful hipshot pose with his left hand on the muzzle of a cannon. and his right arm on his hips.

Kaphar’s painting literally “pins” the injustice of slavery on the face of a Founding Father.

By showing this provocative image, the museum is not aligning itself with protesters demanding to rename buildings and institutions after slaveholders or to remove Confederate monuments from Southern cities.

Instead, by displaying the Kaphar in the context of Peale’s portrayal and African power figure, the museum takes the position that it can be a place where the complexity of America’s racial history can be safely explored.

This open conversation continues in the Focus Gallery, where, among other things, Lee has organized two groups of portraits of black women depending on whether they face the viewer or turn away.

To paraphrase Lee’s reading of these works, depictions of black women turned away from the viewer constitute an affirmation of personal liberation, intimacy, autonomy, and bodily self-control in a culture that once sanctioned the right of white slaveholders to rape black women as a way to increase their human “capital”.

The “face to face” theme encompasses works as stylistically diverse as Charles Sallee’s 1940 painting, “Bedtime,” a tender and intimate portrait of his wife; and Lorna Simpson’s 1992 photographic serigraph, “Cure/Heal,” showing a pair of high-heeled shoes facing the viewer in a dark, mysterious room.

Representing the “face to face” theme, Lee chose Mario Moore’s semi-nude and provocative portrait in which the artist’s wife, Danielle Eliska Lyle, is depicted in panties, gazing coldly at the viewer while standing proudly in the middle. of a pastoral landscape over which it seems to exercise dominance. The painting is a provocative statement of racial and sexual power.

“African King of Dubious Origin,” a 2021 work by Felandus Thames, offers commentary on police violence against black people as a form of martyrdom. As such, it is highly relevant to the uproar that followed the Museum of Contemporary Art Cleveland’s 2020 cancellation of an exhibition of drawings by New York artist Shaun Leonardo depicting the police killings of unarmed black men and boys, including Tamir Rice of Cleveland.

MOCA said it canceled the show to avoid re-traumatizing members of the Cleveland community who had experienced police brutality, raising the question of when and under what circumstances it is acceptable to exhibit artwork which, however well intentioned, could reopen psychic wounds.

The work of Felandus Thames offers an answer to this question. Composed of beads of girl’s hair strung on coated wires, it translates a close-up photo of Rodney King taken after his savage beating by Los Angeles police in 1992 into a shimmering, pixelated curtain that evokes violence without s dwell on morbid details.

Among many art historical and cultural references, “African King” evokes the tradition of depicting the Veil of Veronica, the cloth miraculously imprinted with the image of Christ after Saint Veronica wiped the blood and sweat from her face. on the Via Dolorosa at the Sixth Station of the Cross.

Finally, “Currents and Constellations” takes on a particularly poetic note in Gallery 227, the East Wing space devoted to abstract expressionist painting, by exhibiting a superb drawing by Norman Lewis (1909-1979), alongside one of his canvases.

In 2017, the museum acquired Lewis’ 1960 masterpiece ‘Alabama’, which communicates civil rights-era violence through shimmering black-on-white strokes reminiscent of a terrifying forest fire. at night, but without specifically depicting a cross, fire or lynching.

Next to the painting, the museum now hangs “Winter Branches, #4,” a 1953 ink drawing by Lewis, on loan from his estate, which uses calligraphic strokes to create spiky linear patterns that appear to shimmer.

A wall text describes the drawing as evidence of Lewis’ interest in Chinese calligraphy, a passion he shared with other contemporary Abstract Expressionists. It could also be read as a representation of the prickly nature of black life in America.

Either way, the design is a masterful display of simplicity and invention in pursuit of striking abstract beauty. And this is another strength of the museum show.

The exhibition speaks of the suffering caused by racism in American life, but also of beauty, pride, resilience and very powerful visual thinking. In doing so, it yields a vivid and compelling whole that shows how a deeper understanding of American history should be a cause for curiosity, appreciation, and understanding, not fear and division.

Out & About: the weekend kicks off with the Art After Hours at the Westmoreland Museum