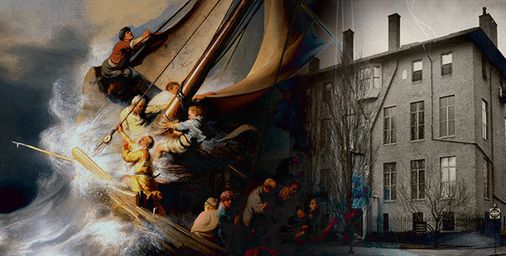 Here is a return on the unfolding of the saga.

Beginning of March 1990: Two weeks before the break-in, a Gardner guard noticed something peculiar on his video screen: a young man being assaulted by two men. He then heard someone, possibly the young one, knocking on the side door of the museum to seek refuge inside. The guard told the young man he would call the police instead.

Before the police arrived, however, all of the men, including the one who was assaulted, jumped into a car and drove off. Investigators wonder if this was the thieves’ first attempt or an attempt.

March 18, 1990: Four people leaving a St. Patrick’s Day party in a building behind the Gardner noticed two men in police uniforms sitting in a car parked outside the museum shortly after midnight.

At 1.24 a.m., a Gardner guard, known to be Richard Abath, opened the door to let in two men dressed as police officers. The men then reportedly handcuffed and taped Abath and another guard before robbing the museum. They smashed the artwork from their frames, leaving behind shards of glass and scraps of canvas.

They also removed the videotape from the recorder that had captured their footage at the museum’s side door as well as elsewhere in the building, before slipping into the empty street after 2:30 a.m. The guards attached to the basement would not be found. until the police are called at 8:15 a.m.

April 1994: The museum received a letter from an anonymous writer who said he could facilitate the return of the paintings in exchange for $ 2.6 million and full immunity from prosecution for thieves and those who held the paintings. . The museum turned over the letter, stamped in New York, to the FBI.

May 1, 1994: The Boston Globe played a role in negotiations with the author of the letter. At the request of the anonymous writer, the Sunday edition of the Globe included the number “1” inserted into the exchange list between the US dollar and the Italian lira.

Matthew V. Storin, editor of The Globe in 1994, said he had been made aware of the contents of the letter and agreed to insert the number – being careful not to make the currency list itself inaccurate – at the request of Richard S. Swensen, the special agent. head of the FBI office in Boston.

“I saw it as a community service decision,” Storin said, adding that he had authorized the move with William O. Taylor, the Globe editor at the time, and made it clear to Swensen that he expected the newspaper to get the first word. if the opening led to the return of the paintings.

A week later, in May 1994: The museum received a second letter from the anonymous writer, alarmed by the aggressive response from law enforcement after the museum received his letter. He wondered if the museum and authorities were interested in recovering the paintings or arresting a low-level middleman.

“YOU CAN’T HAVE BOTH,” he wrote, adding, “Right now I need time to think things over and start the process to ensure the confidentiality of the exchange. “

If he decided that it was impossible to continue negotiating, he wrote, he would provide the museum with clues as to where the paintings were. But he never wrote the museum again.

2010: FBI investigators traveled to Maine to search the home of notorious Boston gangster Robert Guarente, who they say owned some of the artwork before his death in 2004. A search of his farm has nothing given, but Guarente’s wife told officers that before his death, he gave two of the stolen paintings to Gentile.

Gentile denied this, but has now become the subject of the FBI’s investigation.

2012: Authorities searched Gentile’s home in Manchester, Connecticut and found a handwritten list of the stolen paintings and their estimated value, as well as a newspaper article about the museum theft a day after it occurred, as well as ammunition, guns, silencers, explosives and money, prosecutors said.

2013: Gentile was convicted of illegal sale of prescription drugs and possession of firearms, silencers and ammunition.

March 2019: Gentile was released from prison after serving four and a half years. “I had nothing to do with the paintings. It’s a big joke, ”Gentile told The Associated Press at the time.

September 17, 2021: Gentile died at Hartford Hospital from a stroke, his lawyer, Ryan McGuigan, confirmed to The Globe.

New leads in the theft of art from a Boston museum?