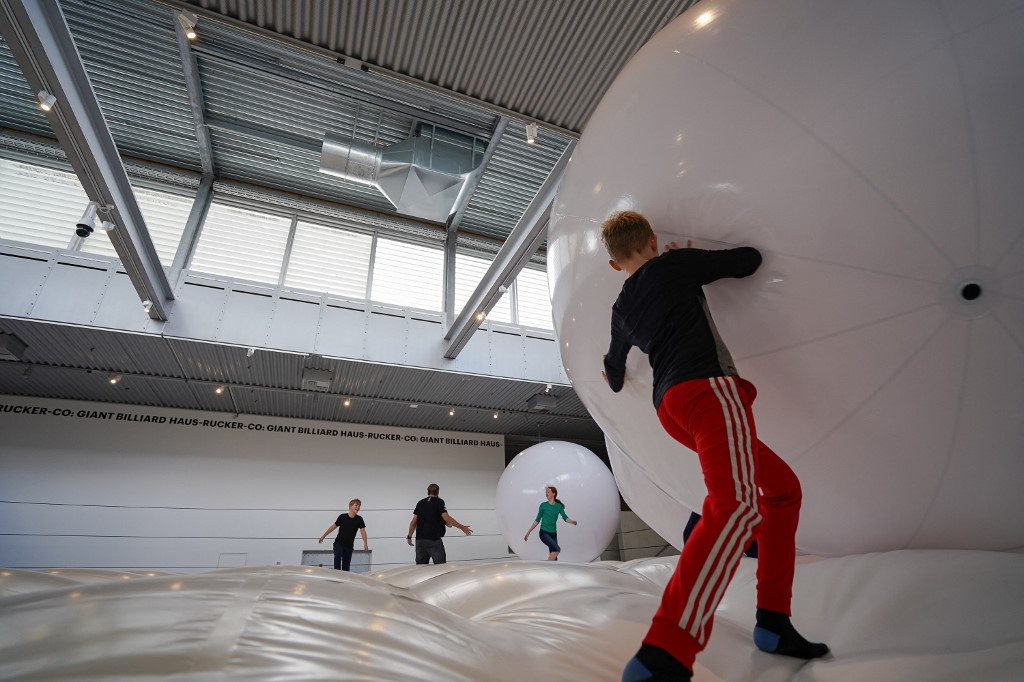 What might appear to be a bouncing game of giant billiards is actually a recreation of a playful art installation from the 1970s, on display in a museum on the outskirts of Copenhagen.

At the time, the group’s three founders believed the times were calling for a sea change – an inflatable oasis, they believed, could help break down existing power hierarchies and create new, utopian urban spaces.

Indeed, among the screams, laughter and gasps, visitors are inadvertently part of a game – they fight against each other or next to each other according to the fall of the giant inflatable balloons.

“Maybe we can give something from the 70s, which was very positive [compared] to the present day,” laughs Gunter Zamp Kelp, 81, one of the three original members of Haus-Rucker-Co, which formed in 1967.

“I hope you come away thinking that sometimes unconventional solutions are needed. And we need them more than ever,” said Arken curator Jenny Lund.

“It also doesn’t matter if they’re having fun, and we need to have fun, I think, more than ever with everything that we’re up against,” she added.

Visitor Frederik Svanholm, 46, had his own interpretation.

“If you’re just lying down, then you’re safe, aren’t you? As soon as you get up in life, danger comes and knocks you out sometimes. That’s what he tells me,” a- he told AFP.

While some of Arken’s visitors might miss the deep social commentary, many seemed eager to partake in a rebound when the facility opens on October 8.

“I think it’s a good idea to make art that, for example, lets you interact with other people,” said 38-year-old office worker Laura Konrad. “You interact with people you don’t know at all.”

The Vaca Museum Sets the Stage for the Fall Festival