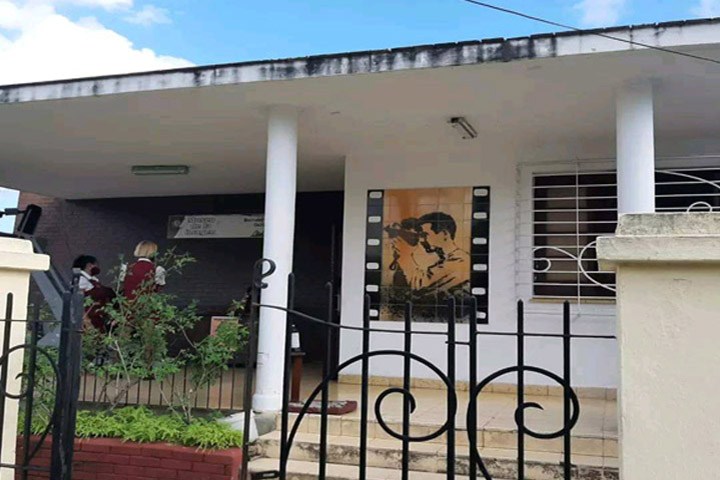 Interview with Demian Rabilero, director of the Museum of Image and Sound, in Santiago de Cuba, the only one of its kind in the country.

On the day of the birthday, short films Tundra, by Jose Luis Aparicio; and Insect, by Jose Armando Estrada; as well as the documentary Mafia, by Daniela Muñoz Barroso, will be presented. The screenings also include the short films the rodeo, by Carlos Melian; and The noria, by Daniel Ross; and documentaries Los Puros, by Carla Valdes Léon; and Mujeres en dos tiemposby Yasmani Castro.

“Without being a museographer, Bebo created the pillars of this Museum as a living and interactive space, out of pure intuition and passion. But not interactivity understood as a button on a touch screen, but rather as the relationship that is established between the visitor and the institution”, explains its director Demian Rabilero, also a poet and editor.

The different rooms of the museum present objects related to the evolution of photography, cinema, radio and television. In addition, it is a space for film screenings, workshops and theoretical exchanges, which favors the preservation of the memory and the audiovisual identity of the country.

The legacy of Bebo Muniz

PPE: What distinguishes the Museum of Image and Sound?

DR: It was created thanks to the hard work and dedication of Bebo Muñiz, linked to our cinematography and our television since the 1930s, and there is still a debt today because there are no studies on its contribution to the audiovisual world in Cuba.

The Museum died out shortly after his death in 2000, and because of many other factors. But today there is a calling to save and preserve that legacy and that vision, amid these turbulent times.

When it was founded, he simply called it the Image Museum. Now “and Sound” has been added, based on the fact that it is essential in film and television, and can also bring radio (which sets it apart from others in the world). It is the work of filmmaker Santiago Alvarez, friend and accomplice of Bebo in the creation of the Museum.

To do this, Bebo managed to convince many people to invest in its creation in different eras, from the historian Arturo Agramonte to the general Roberto Valdes.

Objects related to the evolution of photography, cinema, radio and television are exhibited in its rooms… What strategies do you have for preserving the works – films expire very quickly – and for technological interaction audience with them?

DR: There is a strategy, these are resources that we do not have. There are several cameras that need to be repaired urgently, but fixing them won’t do any good if we can’t keep them. This year we managed to build a glass case that broke before I arrived at the Museum and where most of the cameras we have in storage are kept. Now we will try to fix them.

We keep documents in the safe, some of which are of great value, such as Bebo’s documentary on the expedition to Cayo Confites; but it is more difficult and more expensive. The former director of the Museum has made progress in coordinating efforts with the Cuban Institute of Cinematographic Art and Industry (ICAIC) and the National Union of Cuban Historians; and some of that material was digitized, but then COVID-19 happened…

A museum for the Cuban people

How are new works transmitted to the Museum’s collection?

DR: We are on a tight budget, so purchasing is the exception. We have received very large donations over the past two years. At a time when many people’s premise is to sell, others have donated cameras to a slide with Russian cartoons.

Our bibliographic collection has also grown. It has been more difficult to do with institutions, which throw away what had no value for them, but which belongs to us.

Which objects are the most important or the most difficult to find, these rare notice which museums are proud of and attract attention for some reason?

DR: We have a camera that is perhaps the smallest of the analog era, and one of the first motion picture cameras, and the projector where 500 editions of ICAIC’s Latin American news broadcasts were mounted, or some of the first television cameras that arrived in Cuba.

Of course, it’s nice to have a camera that belonged to Rafael Lezcano (which we have), or a Korda (which we don’t). But at this point, I reject object fetishism, and a home camera with photos taken by people without public knowledge in their homes, can sometimes have an even greater impact on the viewer (because of the emotions that it evokes) instead of a photo taken by a reputable professional.

This is what the studies we have carried out for future curatorial projects have shown us, without renouncing fundamental pillars such as the collections.

Memory and identity are two important terms for the Museum…

DR: We are a museum for the Cuban people. Manipulating these terms takes dedication and study, there is no room for improvisation. Life and people are the most important things; it has never been a museum for the elite, but has always been an inclusive, breathing and dialectical space.

Nothing is more difficult than creating a museum

A documentary series titled The Bebo Museum is currently filming…

DR: It’s a very modest series technologically speaking, recorded on my laptop, an iPhone 6 with a battery that runs out very quickly. It is a kind of investigation into the origins and stages of the Museum, where we collect anecdotes and trace documents.

The other option was to lose some testimonials because we didn’t have the technology we needed. We recorded four episodes; I don’t make excuses but it’s stopped for now…

On the occasion of the 30th anniversary of the Museum, former employees and collaborators of Bebo will be present and it will be a golden opportunity to film the fifth episode of the series, dedicated to the inauguration of the Museum where it is located today, of which we luckily have photos, with Santiago Alvarez in them too.

The series can be viewed on the YouTube channel of the Provincial Center for Cultural Heritage of Santiago de Cuba. I run it, of course.

How does the Museum fit into the cultural landscape of Santiago de Cuba?

DR: Sometimes you get dizzy and think you haven’t done anything. But looking back, when I started working here as a leading expert in October 2018 and then I was appointed director in March 2020, you realize that the job was done and you have grown on a personal level.

We can start planning for the future again and we have organized documentary workshops, offered by people who have so much heart that they have not charged for this service, such as Daniel Diez Castrillo, founder of TV Serrana and one of our defenders, or young filmmakers like Alejandro Alonso and Daniela Muñoz Barroso.

We have seen our collections grow. We organize a literary circle on the third Thursday of each month, which has been a great success, where young people are an active and key element and share their poetry, their music, their act…

Dreams come true and, when everything suddenly stops, I remember what my direct superior, Suitberto Frutos, said to me: “Nothing is more difficult than what Bebo did: create a museum.”