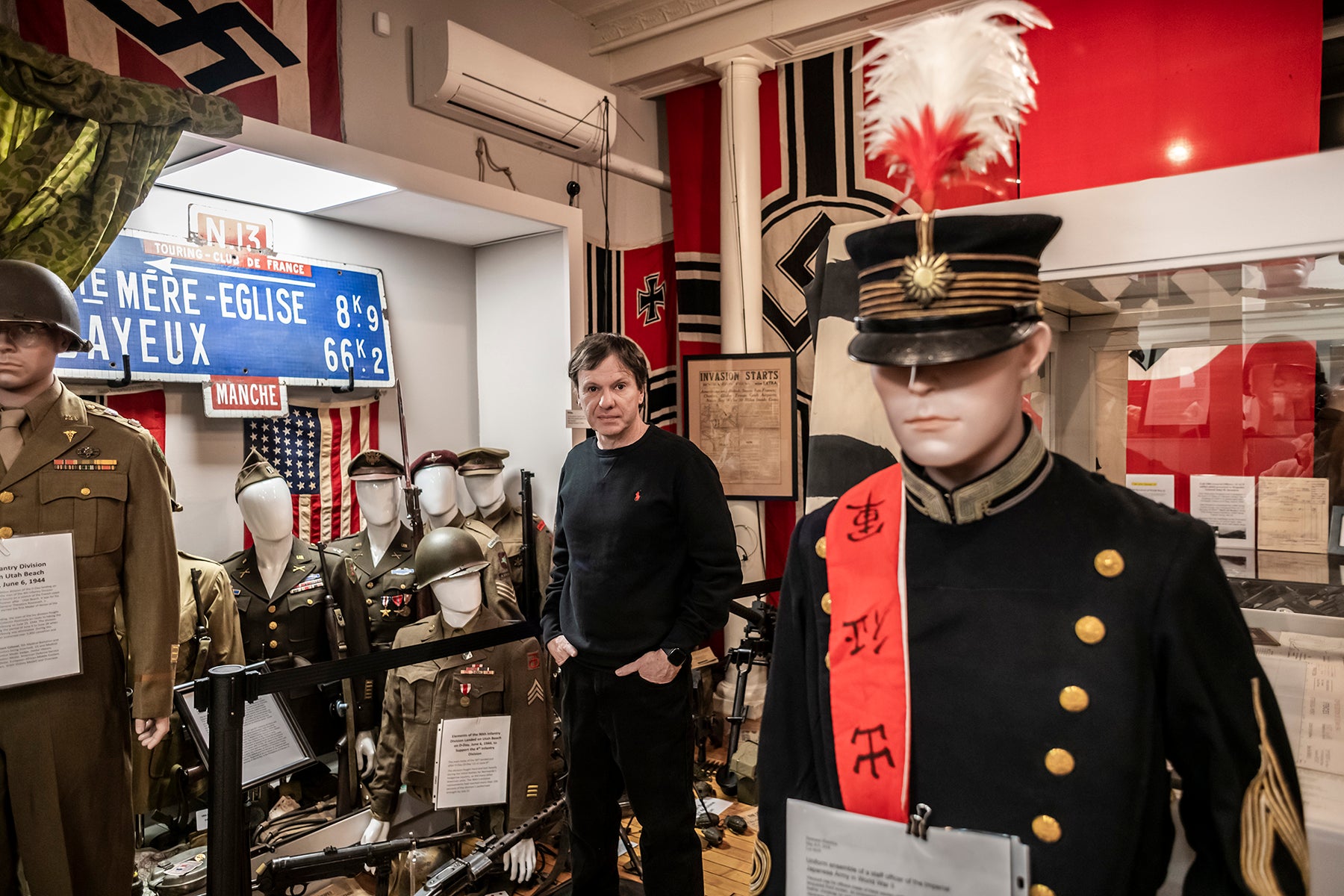 KINGSTON, RI – February 28, 2022 – With the Russian military invading Ukraine, it’s hard to avoid the thought that another major war in Europe is about to break out.

Around the world, China has come under heavy criticism for reports of its oppression and violence against Muslim groups like the Uyghurs in Xinjiang.

Meanwhile, here in the United States, most have been horrified by the attack on the US Capitol and many fear that supporters of a former president, whom many critics liken to a cult leader, will sue the efforts to overturn the elections.

With so much violence and potential for war, now seems the perfect time to visit the World War II Foundation Global Education Center and Museum in Wakefield, watch one of foundation founder Tim Gray’s more than 30 World War II documentaries that tell personal stories of this generation, and learn about his latest creation, virtual reality presentations that allow viewers to hold on the shores of Normandy during the D-Day invasion.

In what has been described as one of the best WWII museums in the world, visitors can see, feel and hear the heroism, fear, selflessness and acts of bravery of those who served and of those who remained in the United States. But they can also experience the bloodshed, hatred and worship of a leader who allowed millions of Jews to be killed in the Holocaust.

The museum is open on Wednesdays and Saturdays by appointment. Children under 12 and veterans can visit for free. Regular admission is $10.

“For school groups, the Foundation covers admission and bus transportation to the museum,” Gray said.

For his contributions to capturing and preserving the history, artifacts, and narratives of those who served in World War II, Gray, a 1989 graduate of the University of Rhode Island’s journalism program, was inducted into the Rhode Island Heritage Hall of Fame last fall.

While thrilled with the honor and others like America’s National Public Television Programming Achievement Award and the Emmy Awards, Gray says the most important thing is for the public to visit the museum, tucked away in a corner from the former Kenyon department store at 344 Main Street, watch the documentaries and discover the virtual reality products he developed.

“I hope the museum and my other work helps show kids and adults what to watch out for today,” Gray said. “It can help people be aware of warning signs.”

He talked about it as he passed pictures of Jews in mass graves and a mannequin displaying an authentic striped uniform of a young concentration camp worker who made shoes in the camps.

Difficult to avoid being overwhelmed when entering the museum. There are displays of uniforms and combat gear worn by American soldiers and their allies, and those of the Germans and Japanese, wartime propaganda posters filled with hateful depictions of various groups, weapons and gear used in Europe and Asia. As big band music and old radio shows play in the background, visitors can read letters of grief and hope sent to and from war zones, see photos of young men in times of war and look and borrow one of the 600 books that line the shelves.

“The museum is three years old and about 2,000 young people have visited it,” Gray said. “No children were disengaged. They are amazed by the colors, the uniforms. These are tactile exhibits. If a child wants to put on a helmet, he can. If a girl wants to touch a rifle, like the Johnson 1941 rifle , which was made in Rhode Island, it can.

Visitors can also activate an air raid siren, see a radio made by a soldier in a Japanese POW camp, touch a Japanese samurai sword and a piece of the USS Arizona, the warship that was attacked. by the Japanese and remains at the bottom of Pearl Harbor today.

The ceremonial shovel used by Adolf Hitler to dig the ground on the highway and some of Hitler’s china are also displayed there.

Gray honors Tuskegee Airmen in a display. He said they were among the best pilots of World War II, yet they were subjected to Jim Crow laws and racism at home and in the service.

A former Channel 10 sports reporter, Gray said he was looking to do work that would inspire him and others after leaving television.

“I thank URI for helping me make this change, and having a solid background in journalism from my time at URI has allowed me to make this smooth transition to a new career. Journalism professors like Linda Levin and Tony Silvia have been so important to my development.

“But the best course I took was the Holocaust with Professor Bob Weisbord. Everything I did was because of what I learned at URI and from Linda, Tony and Bob.

The beginning of his work to tell the story of World War II through the people who lived through it began in 2006 when he brought five veterans back to Normandy, France to tell their stories for a documentary.

“I found even more stories, and I found that each one was different, no two were the same.”

And now he’s moved to virtual reality, largely because he knows young people learn visually. He has developed three virtual reality products that immerse viewers in the heat of action at Pearl Harbor, Normandy and the Battle of the Bulge.

“We put people on the beach in Normandy as the waves hit their feet and we put them in a German bunker at the Battle of the Bulge.”

You can learn more about the museum, Gray’s documentary and his virtual reality work by going to the World War II Foundation.