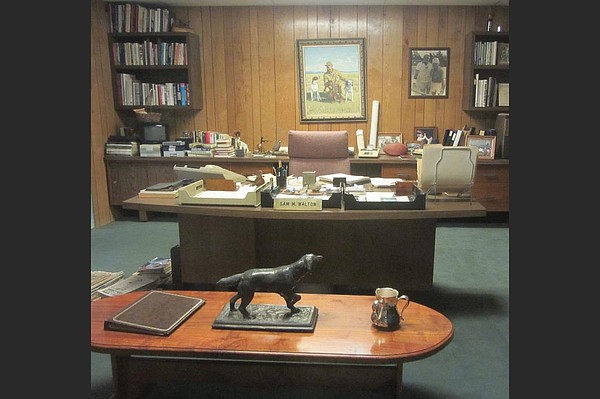 BENTONVILLE – As the New Years festivities loom, a sled remains parked on the sidewalk in downtown Bentonville Square. Absent from Santa and his eight reindeer, it can be found outside the Walmart museum as a prop for holiday photos.

The museum occupies a building where Sam Walton opened one of his first stores, Walton’s 5 & 10, in 1950. The exhibits tell the story of the retail empire he built to make the Northwest of Arkansas a king of world trade. Visitors enter through the Spark Cafe, a retro soda store that pays homage to Walton’s penchant for butter and pecan ice cream.

Visitors to the museum can start by watching a five-minute video. In it, Walmart President and CEO Doug McMillon touted Walton as an “unassuming leader” who “believed in making heroes” and was “an illustration of the American dream.”

These brilliant words set the tone for an attraction that has some attributes of a shrine. Among the relics on display are Walton’s 1979 half-ton Ford truck, a pair of his hunting boots, and the Presidential Medal of Freedom he received from George HW Bush. Family artifacts include the 1943 wedding dress of the bride Helen.

The most elaborate commemorative exhibit, behind glass plaques from ceiling to floor, is Walton’s Executive Office. The piece, preserved as it was before his death in 1992, was transported to the museum with the papers still in place. Its content testifies to a senior executive immersed in his work.

A surprising fact raised at the museum is that it took a long time for Walton to create one of the largest retail companies in the world. A quarter of a century passed before his business really started to take off.

A long, illustrated timeline shows Walton’s very gradual progress, starting with the Ben Franklin store he took over in Newport in 1945 at the age of 27. Five years later, he bought the Bentonville variety store which now houses the museum. Another 12 years passed before the Wal-Mart Discount City opened at Rogers, its first use of the now iconic name.

The tone of the museum is as optimistic as the growth statistics. No mention is made of the challenges posed by Amazon and other online behemoths.

There’s a melancholy display, a folded American flag added two years ago. Its information panel bears this title: “The flag that carried the witness. It hung in the entrance of a Walmart store in El Paso, Texas on August 3, 2019, when a gunman “determined to destroy our way of life” killed 22 customers.

A message from the president and CEO of Walmart states that “When the worst happens, we fight against ourselves. We support each other, pray together, stand firm and heal together.”