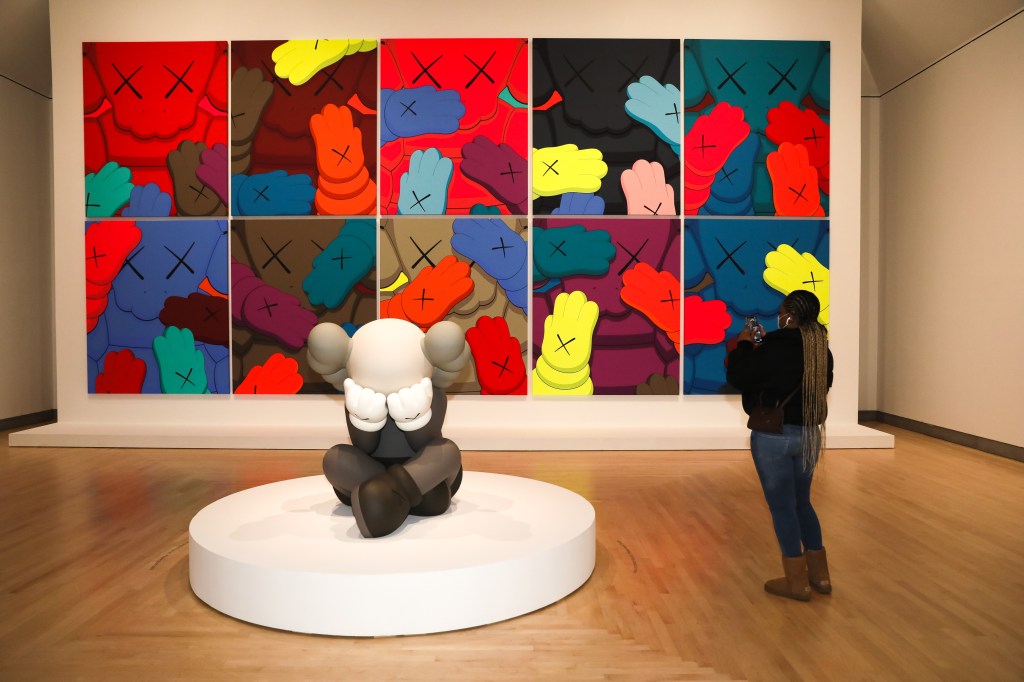 For curator Eugénie Tsai, the installation of “Kaws: What Party” has sometimes been a visceral experience. She recently watched riggers lower the gargantuan head of a colorful Kaws sculpture to her body within the Brooklyn Museum, and felt empathetic for the downcast X-eyed character.

“They had wrapped the straps around the ears and they were pulling them down, and I just felt my own ears hurt,” Tsai said the week before the show opened. “It’s a sculpture. It is not a living being. But you can’t help but identify with the characters.

Kaws’ companion figures – riffs on iconic characters like Mickey Mouse, the Michelin Man and Elmo – have become a defining aspect of his practice, implemented in larger-than-life sculptures, collectible vinyl figures and plush dolls. In 2015, the Brooklyn Museum acquired the artist’s sculpture “Along the Way,” consisting of two wooden figures, each lowered with a Disney-gloved hand around the other’s back in support.

This sculpture is installed in the hall of the museum. Tsai recalls the reaction of three recent young visitors, who ran between the legs of the sculpture, laughing – playing. “And then one of the girls just stood in front of the sculpture and said, ‘I’m scared,'” says Tsai, who joined the museum in 2007 as curator of contemporary art John and Barbara Vogelstein. “And I wanted to go over to her and say, ‘Don’t be afraid. They are gentle giants. And it’s just amazing to me – how we see them as surrogate humans, as surrogates for us. “

This often unsettling emotional dichotomy – between childish and playful images and vivid colors paired with sad expressions and X’s for the eyes – is on full display at the museum, which has investigated the Brooklyn-based artist’s career in his native neighborhood. After the museum acquired sculptures in 2015, they began chatting with Kaws – aka Brian Donnelly – about preparing for an exhibition that addresses all aspects of his career.

The exhibition is organized chronologically, starting with the first graffiti sketches in his notebooks – some of which are being shown in the United States for the first time – and the advertising posters that he began to embellish on the streets in the 90s when he was a student at SVA. Also on display are his character-oriented paintings, large-scale sculptures, vinyl figurines and plush dolls, as well as collaborations with other artists, such as the Campana brothers and fashion brands from Dior to Uniqlo. . The exhibition culminates with the present; Donnelly created a series of paintings and new sculptures specifically for the show.

Tsai was surprised at the difference in reading his work in person compared to images of the work on a screen. She was particularly struck by the finish of the show’s signature artwork, a bright pink sculpture with the physique of a Michelin man. Although the material reads like plastic, it is actually painted bronze. “I now understand his meticulous craftsmanship – which I knew he appreciated, but seeing him in person was right – I mean, it was a little mind-blowing,” she says.

Kaws is a bit of a divisive artist, at least in the art world; he’s someone who has gained enormous popularity outside of the art establishment and has branched out into product design. His work is collected by bold names like Swizz Beatz, and in recent years he has sizzled in the auction market – in 2019, one of his paintings on The Simpsons (“The Kaws Album”) sold for over $ 14 million.

Tsai hopes the Brooklyn Museum’s exhibit will provide visitors with a new context for viewing the artist’s work and discovering less flashy aspects of his practice.

“Sometimes people pay more attention to the marketplace, to the device around Brian’s work, and that kind of blinds them to the fact that he’s an artist who does these amazing works,” she says, adding that putting his early graffiti in conversation with his recent ones allows viewers to see how ideas explored by Donnelly early in his career have evolved into different mediums. “How his origins as a graffiti artist, someone who worked in the streets, in the public domain, shaped the rest of his career,” Tsai explains.

Donnelly’s giant inflatable “Companion” sculptures, which he installed in Victoria Harbor and Virginia Beach in Hong Kong, are linked to his early days as a street artist: the sculptures are large-scale, temporary and in outdoor urban spaces. “They really change our perception of a setting, of an environment,” Tsai explains of the inflatables, which the museum couldn’t include in the exhibit due to the size and regulations on the. helium. “He is a remarkable painter, but painting and his studio practice is only part of a much larger career.”

“Kaws: What a Party” culminates in the museum’s 40-foot rotunda, which Tsai says is the best setting for visitors to explore the augmented reality aspect of the exhibit. In collaboration with the digital art platform Acute Arm, visitors will be able to interact with Kaws’ sculptures via their smartphones.

Like the museum’s initial sculpture acquisition, “Kaws: What a Party” is already proving popular; weekend dates for the paid show are full until the end of March. But there is a lot of time to get by; the exhibition will be visible until September.

“Maybe you are a huge fan, or maybe you are only familiar with some of his practice,” Tsai explains. “What I hope everyone will take away from the exhibition is an overall idea of ​​the extent of [Donnelly’s] practice.”

More of the eye:

Is blockchain the future of art collecting?