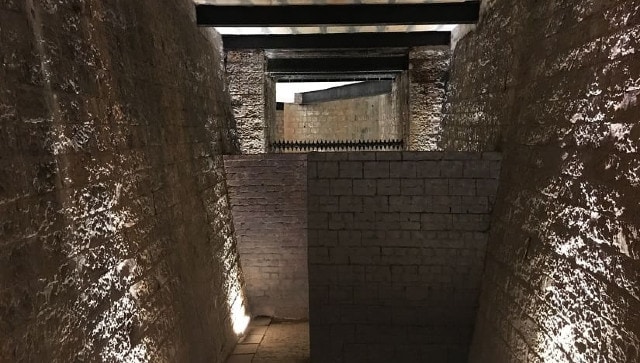 What do you want to know

Although the museum is special for its theme of the Indian independence movement, its location is equally significant as it appeared in a network of pre-WW1 British-era bunkers that were discovered under the Raj Bhavan in 2016.

The fort section inside the bunker. The British-era bunker was discovered in August 2016.

Prime Minister Narendra Modi will on Tuesday inaugurate the country’s first underground “Gallery of Revolutionaries”, a museum dedicated to the luminaries of India’s independence movement, established in Maharashtra Raj Bhavan.

Although the museum is special for its theme, its location is equally important as it appeared in a network of bunkers from the pre-WWI British era.

In Mumbai, the first program will take place at Raj Bhawan. I will inaugurate the Jal Bhushan Building and the Revolutionary Gallery. This gallery is linked to a bunker that was discovered in 2016. During colonial rule, it was used to store weapons and ammunition.

Here is everything you need to know about the museum:

The Prime Minister will open the ‘Revolution Saga’-themed gallery that appeared in the underground network of 13 pre-World War I (WWI) British-era bunkers discovered at the sprawling Raj Bhavan campus in August 2016 during the tenure of then Governor C. Vidyasagar Rao.

Later, the current Governor Bhagat Singh Koshyari oversaw the creation of the “Gallery of Revolutionaries” under the guidance of historian Vikram Sampat and with the help of the South Central Nagpur Cultural Center. The exterior and interior view of the Revolutionary Gallery Museum at the Raj Bhavan in Mumbai.

There will be hundreds more, known and unknown, that will feature in the museum in its later phases, depicting the entire 90-year “saga of the revolution”, from the first war of independence in 1857 to the freedom of the India in 1947, officials said Raj Bhavan.

The gallery includes information on the heroes of freedom, their role in the independence movement, sculptures, rare photographs, murals and even details of tribal revolutionaries drawn by school children.

The exhibits are from State Archives Department, Asian Society, Kesari Archives, Savarkar Museum, etc., and also include a scene from the historic coronation of Chhatrapati Shivaji Maharaj in the underground hall hall of the bunkers.

Shortly after the discovery of the bunker in August 2016, the government ordered the preservation of the underground structure which has been neglected for over a century with the constant water leaks rendering the ‘Jalbhushan’ building located at- above from an architecturally dangerous point of view.

“The bunker has been retained without compromising the security of the historic building which is the legacy of Raj Bhavan and the governor’s residence and office, ‘Jalbhushan’ stands on its top,” an official said.

A structural audit of the underground bunker – comprising 13 rooms of various sizes plus a large 20-foot-high entrance, a fort-like structure with a long ramp to take weapons inside – was carried out, then it was reinforced by teams of experts. A replica of a cannon used in the era of the British Raj.

Conservationists have taken great care to preserve all original features while restoring the bunker and now housing the Revolutionaries’ Gallery in this location.

Incidentally, on August 18, 2019, President Ram Nath Kovind had inaugurated a virtual reality museum in the bunker, but many other rooms were empty and have now been used for the Revolution Saga gallery.

All photos by Suryasarathi Bhattacharya for Firstpost

With contributions from agencies