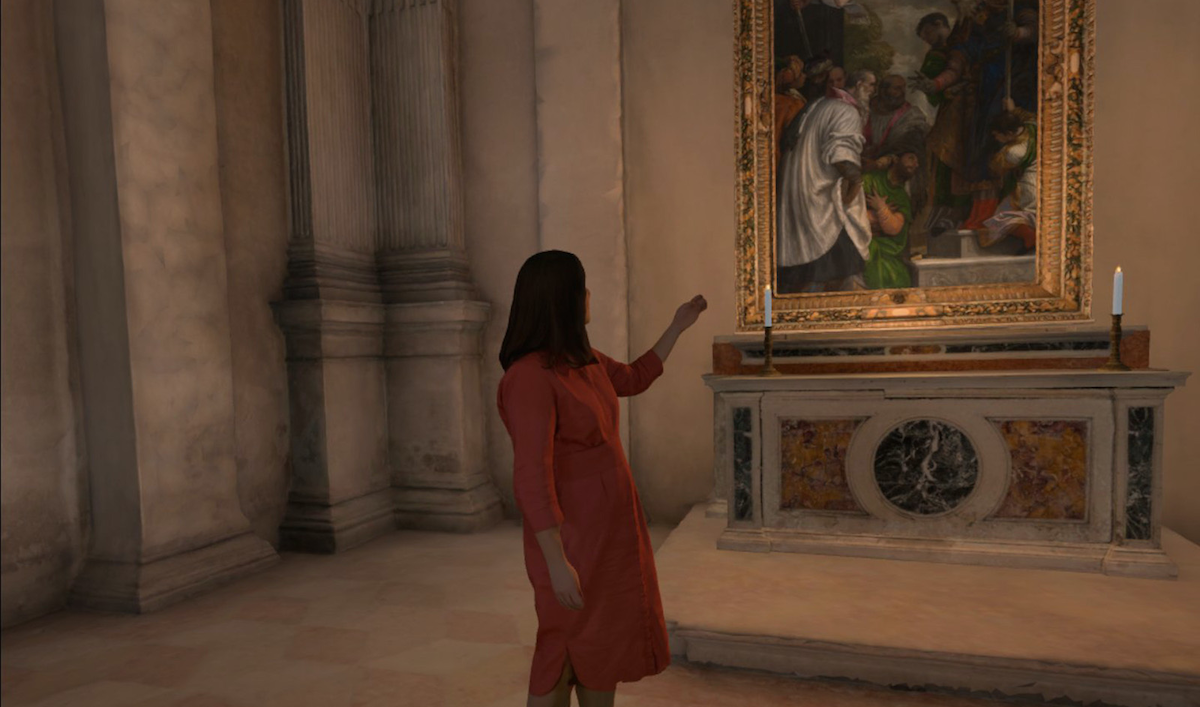 Why is a virtual work by Veronese in a physical museum?

LONDON – At the end of 2020, Marina Abramovic sold via Christie’s what was billed as a “world premiere”: a mixed reality work seen through a VR headset in which a hologram of the artist entered the viewer’s immediate environment , like a puffy Pokemon Go. His ambition was to bring the “presence” of the artist to anyone and anytime (although in reality it was limited to the person who bought the thing). Following two years of COVID-19 restrictions and communicating with others via tedious video chats, the National Gallery’s Virtual Veronese ingeniously uses the VR concept for more practical and educational reasons. Its goal, according to the National Gallery’s digital director, Lawrence Chiles, is to use immersive storytelling to add “a depth of experience, meaning and emotion to the engagement of Gallery visitors with our paintings. “. Using VR headsets, visitors will be able to see “The Consecration of Saint Nicholashangs in the chapel of San Benedetto al Po, one of the largest Benedictine monasteries in Europe, for which it was commissioned in 1561.

Upon entering a white room in the bowels of the museum, diamonds painted on the floor to delineate where each visitor can stand for the experience, I was handed a health form. A guide explained to me the procedure and how to put the headphones around my neck, then the headphones, then the headphones on the ears; I tried not to get tangled up but still managed to accidentally take my glasses off in the process. My headset malfunctioned, so a steward wrestled with it for a few moments, before I entered the diamond and found myself “inside” the chapel, standing in front of the altar on which the painting appears. Visitors have two options: in the first, the curator, Dr. Rebecca Gill, intervened to give a lecture on the altarpiece and its significance; in the second, two actors dressed in Benedictine robes play a novice monk and the historical figure of Abbot Andrea Asola, who commissioned the painting. I have a thing for historical drama – heaven knows actors have to find work – and I love how endearing this one is, believable as it is. The event lasts eight minutes.

Many visitors to the National Gallery may not consider the original context of the religious works as they come across them hung one after another at medium head height and evenly lit in the museum’s decidedly secular surroundings. Presenting a piece “inside” the chapel for which it was intended can therefore be revealing for those who are unfamiliar with European religious practices or even the history of art. Not everyone knows the interior of Italian Renaissance churches, and indeed it is not really obvious or perhaps easy for the majority of viewers to travel abroad to see a painting, let alone one in one small town outside Mantua. As such, it is an excellent teaching tool that will hopefully inspire viewers to seek out and reconsider the painting as it is displayed in the institution, and perhaps lead them to t he stops and wonders how the gallery setting is inadvertently coloring our reception of the paintings.

It is difficult to dispute the nobility of this cause. What can be said, however, is that it takes a major step between viewing virtual reality and traveling to study the piece itself. While the photography of paintings for the purpose of digital reconstruction is now painstakingly accurate and has proven historically and pedagogically important in several cases where replicas are needed, the resulting image is still distorted by blur when viewed through the VR headset, regardless of the resolution used to capture it. Coupled with the fact that the VR setup means you can’t walk to the room, the experience isn’t about looking closely, as that’s not possible by such crude means. For a setup intended entirely to present a painting, this feels more in the illusion of the stage; it is hoped that the gimmick will not eclipse the art.

Likewise, upon seeing the chapel (which is faithfully reconstructed right down to the dirt stains that adorn the walls), I was reminded of how similar but different it was to the actual experience. A Gregorian chant performed by Veneti Cantores, taken from a choral book produced at the monastery in the 1560s and therefore contemporary with the altarpiece, is played through the headphones. It certainly helped set the mood in a pleasantly historic way. What was missing were the catholic “smells and bells”: the incense and the atmosphere and especially the people present only for the purpose of worship, as you encounter in reality.

A “timeless” sky moving indistinctly outside the windows was also unnerving; what time of day was it supposed to be? Beyond the chapel settings, the visuals faded into a mysterious blackness. Any work of art we see is framed in our memory by its immediate physical setting, extending to encompass the gallery walls, then the gallery’s location in a city or town, then the wider geographic context. , And so on. Here Veronese is in the void, or the isolation of cyberspace. The limits of the current level of sophistication of the technology circumscribe its objectives. To play devil’s advocate, you could say that eventually the technology will be so good that everyone will have virtual reality, and the picture will be so great that it’s not necessary to visit at all to the National Gallery to see it, thus negating his own purpose. But perhaps we are now far from this eventuality!

Although it does not replace the very essence of art – looking closely, meticulously examining the brushstroke, imagining the movements of the painter, sensing (feeling) the “presence” and tactile quality of the physical thing – this enterprise is none the less useful. Whether at its core it illuminates religious works that may seem inscrutable to many without existing cultural knowledge, or makes people wonder what role a gallery plays in exhibiting art, and even why the painting is in the Kingdom United rather than Italy, then this is a useful step towards public engagement – which is precisely the point.

Virtual Veronese continues at the National Gallery (Trafalgar Square London) until April 3. The exhibition was curated by Rebecca Gill.